And lead us not into inflation

26 Jun And lead us not into inflation

Posted at 09:53h in Uncategorized by cdcwm

Since our last update on 10th June, equity markets have slipped back marginally but this should not be a surprise, given the strength and pace of the recovery since its low-point in March. Indeed, the gradient of the recovery in share prices had left many market-watchers scratching their heads in disbelief, so a pause for breath was perhaps inevitable and is actually welcome. Both the FTSE100 (UK) and S&P500 (US) now sit where they started this month and are generally trading in a fairly tight range.

There is no denying the easing of lock-downs is putting investors in a more jovial mood and the high frequency data appear to be pointing to more activity, albeit from a very low base. But news of a spike in infections, particularly in the US has brought a sense of realism in the past week or so. Whether this represents a second wave, or merely an extension of the first appears to be a matter of conjecture, but news from the likes of Arizona, Texas et al, has been enough to check the recovery. This is precisely the kind of ‘stop-start’ recovery we expected.

Any further advance in share prices for the remainder of the year, from these levels, might be muted, but equally we do not see share prices retracing back to levels seen during the worst of the crisis. What we are confident about is that the economic data should continue to improve and this should generally be supportive for shares this year, and positive next. Moreover, central banks will keep rates at virtually zero until the employment numbers start to normalise, and that is still some way off, at least into 2022.

Both the UK and the US do have additional headwinds to contend with. In the UK, something we have barely spoken about during COVID19 is Brexit. If the discourse is to be believed, negotiations have not advanced by much but the deadline for extending the period of transition (30th June) is fast approaching. The UK Government seems determined not to ask for one and whilst Michel Barnier appears to be in a more conciliatory mood, it is hard to imagine anything meaningful being tied up by the end of November (and preferably sooner), to allow for ratification by the year end. In essence, we think any Brexit deal will be wafer-thin, with many of the details to be ‘coloured-in’ at some future point.

In the US, election looms. The economic miracle which followed Donald Trump’s election victory in November 2016 appears to be crumbling around him and with it, his re-election hopes. Indeed, his response to COVID19 and the aftermath of the tragic events in Minneapolis four weeks ago, make him look all-at-sea. Whilst Joe Biden is a moderate, and therefore possibly more market-palatable than say Bernie Sanders would have been, who he chooses as a running-mate will matter to markets. A more left-wing radical such as Elizabeth Warren, for example, could potentially unnerve investors.

So what has all of this to do with inflation and is this reason to be fearful? It seems perverse to be talking about inflation, when it has been absent from most developed economies and many have been more concerned about deflation. This helps to explain why government bonds have tended to perform so well.

But as Isaac Newton postulated, every action has an equal and opposite reaction. During the COVID crisis central banks around the world have pumped huge amounts of liquidity into the financial system. Money supply has increased exponentially during the crisis, at a truly unprecedented rate. As the chart below shows, central banks have turned on liquidity taps before, but never on this scale and at such break-neck speed (I apologise in advance for the poor quality of the chart, but it illustrates the point well): 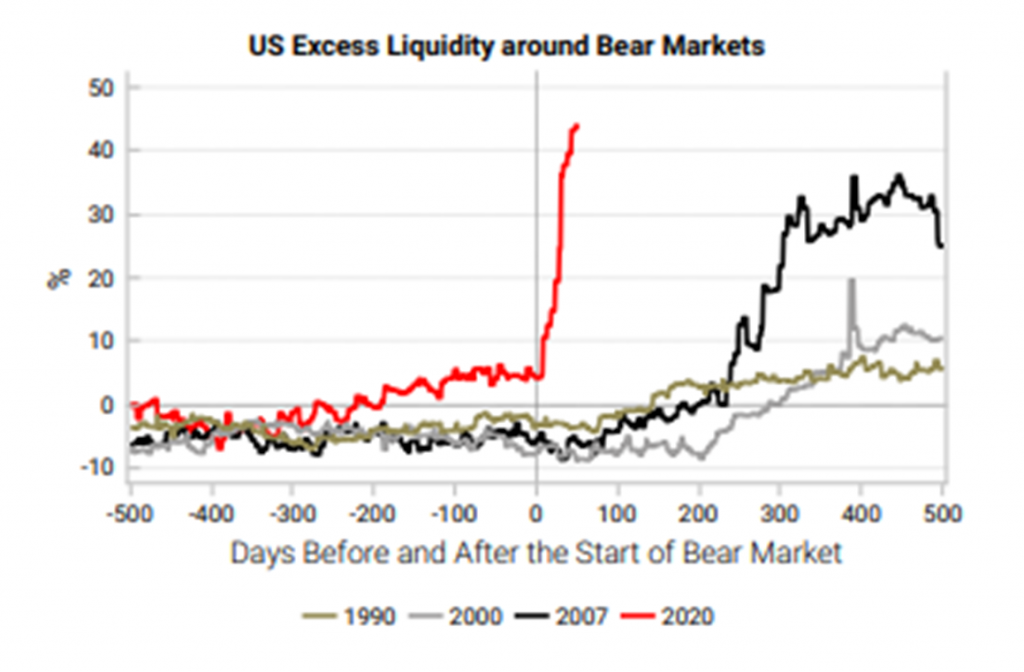 Whilst this liquidity shot has been welcome, and has undoubtedly helped to protect financial assets from a far worse fate, we feel there will ultimately a financial penance, in the form of higher inflation. Inflation is public enemy number one for investors, but it is particularly problematic for fixed interest investors as it bites into their fixed return. As a consequence we see a pick-up in inflation as potentially making life very uncomfortable for holders of say, government bonds (gilts). Across our portfolios we have pared our gilt exposure back to virtually zero.

Although the threat of inflation is something we have not seen for a long time, we do think central banks will allow their respective economies to ‘run hot’ for a while given the difficulties of the past few months. In other words, whilst some inflation will creep back into the system as economies return to a degree of normality, we see no immediate prospect of higher interest rates. Even the notoriously inscrutable head of the Federal Reserve in America, Jerome Powell, has said as much.

So what is the best protection against inflation? Well aside from the obvious candidates such as index linked bonds which, unless you buy them at issue and hold to redemption, cannot guarantee to beat inflation, equities have proven over time to be the one truly reliable hedge against inflation. Reason enough to maintain our overweight stance in equities for now.