Are we nearly there yet?

31 May Are we nearly there yet?

Posted at 09:29h in Uncategorized by cdcwm

This will be a familiar term to any parent taking a young family on a long car journey. In the 1970s on the backseat of a hot, cloying Ford Cortina, I remember my own brother asking the very same question as we embarked on a car journey to southern Spain. We had got as far as Basingstoke (from London) before he made his enquiry.

Investors must be asking themselves the very same thing particularly when they see the S&P500 in the US falling for seven straight weeks, which in terms of losing streaks, is pretty extreme. Concerns about inflation appear to have given way to the fears of recession and that has unnerved equity investors in particular.

The conventional wisdom goes along the lines of, inflation is becoming a problem therefore interest rates must rise aggressively, triggering recession. Whilst the logic might appear sound, the reality might be somewhat different, but let’s start with the elephant in the room, the prospect of an impending recession.

Central banks around the world face a conundrum. Inflation has soared as we feared it might (see our Profile Update Jan 2022). The natural response is to hike interest rates and we have already seen these rise on both sides of the Atlantic but how do the authorities check inflation without tipping the economy into negative territory? The answer might be to let markets do the heavy lifting for them.

If we think about how our living standards will have changed as individuals this year. A basket of goods or our supermarket shop will have become considerably more expensive. We are paying more for our energy. Interest rates have risen, meaning those of us with (variable) mortgages will pay more or anyone thinking of financing (or refinancing) large ticket items like a car or home improvements will not see the rates they did last time. Combined, all these subtle elements serve to squeeze household income and help to cool the economy and hopefully douse inflation. Added to which, weaker financial markets mean we might think twice about being frivolous.

The following chart of the Bloomberg financial conditions index in the US highlights how monetary conditions have tightened to pre-covid levels. We focus on the US here because it is the world’s largest economy and the stock market has been hit harder than the UK so far in 2022. 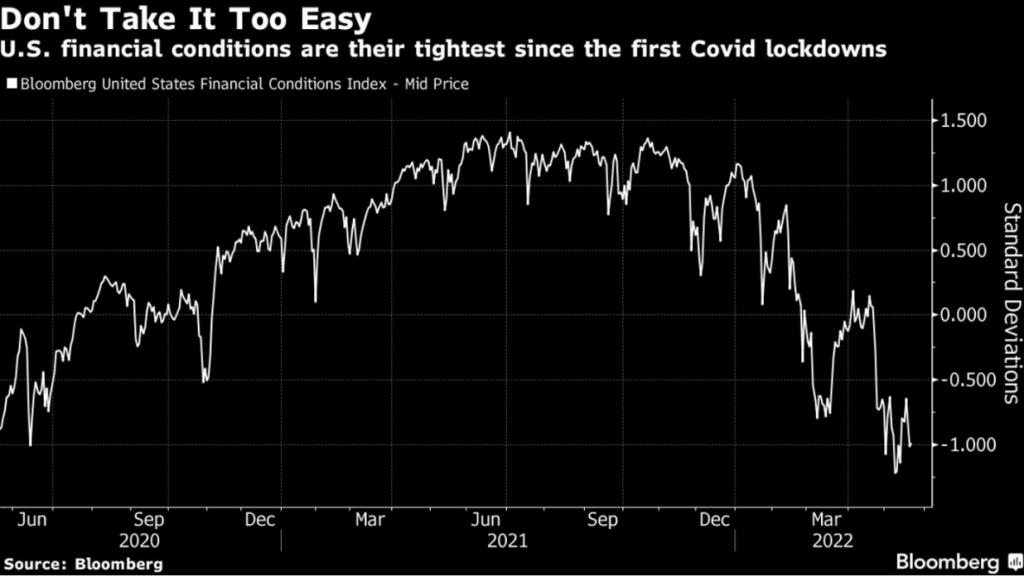 Let us be clear, we think the chances of a recession are elevated and the risk is greater for the UK than say the US, but it is by no means a ‘given’. But a marked squeeze in household incomes and the knock-on effect to economic activity could make it feel like a recession, even if we technically manage to avoid one.

Several commentators are suggesting that financial markets such as we have witnessed so far in 2022 will in themselves trigger a recession. We think this is wide of the mark, firstly because history suggests otherwise. The chart below highlights previous market corrections which have not ultimately led to recession, and secondly we think the healthy employment picture might help cushion the slowdown to some degree. If people are finding it easy to get work, stay in their jobs and pick up pay rises to boot, they might be prepared to continue spending at least part of their salary. This should keep the economic scoreboard ticking over.

The market set-back toward the end of 2018 is interesting because there are parallels with now. The Federal Reserve in America should have been raising interest rates but changed course when the markets wobbled, a u-turn that became known as the Fed Pivot. The difference is that in 2018 it did not face an inflation problem which it most certainly does now. This means we will not see the Fed (or the Bank of England) back-pedal on raising rates and more to the point, the central banks overtly want to keep markets in check, at least for now due to the mollifying effect lower share prices have on activity.

Does that mean the case for investing in stocks is compromised? We think not, and in fact, quite the opposite. Consumer behaviour has changed but despite the pressure on household incomes, consumption has remained surprisingly robust. During covid we tended to sit at home and buy goods, but now life has returned to normal, buying patterns have switched to services – we eat out more, we are going on holiday, theatres and cinemas are full. In March, Delta airlines reported the best month for bookings in their history.

Strong employment and continued consumption should help support company earnings. At the start of the year when bond yields were low, the Price Earnings (or PE) ratio for the US market was around 25 times. The PE is simply:

A PE of 25 means buying US stocks at the start of the year, it would have taken 25 years of company earnings to earn back the share price investors paid at that time. Lower bond yields generally help to justify a higher PE ratio on stocks. But with bond yields having risen, this leaves the PE on 17 times, or put another way recouping the cost of buying shares in 17 years, rather than 25. This is in line with the long run average. Remember also that the PE ratio (generally the lower the better) can be influenced by two variables – price and earnings. Company earnings which grow even modestly from here, particularly from the service-based areas of the economy, will either drive down the PE further or cause share prices to rise, to maintain the long run average PE multiple.

So, returning to the central question, are we there yet, or more pertinently, is the worst over? It is probably too early to say for sure but the curious thing is when we see words like ‘capitulation’ being used in the financial press and this is backed-up by elevated cash levels among investors (the highest since the pandemic), it strongly suggests equities are now in buying territory. It is also worth bearing in mind the old market maxim that ‘it is better to travel than arrive’.

In other words, if we do flirt with recession, by the time we actually see evidence of it, markets will be anticipating the brighter times ahead, and any investment opportunity might have passed. Bottom line is we are much nearer Southern Spain than the grey skies of Basingstoke.