Posted at 14:43h in Uncategorized by cdcwm

Welcome to our market and 2020 budget update.

In some ways, given the recent turbulence in financial markets, the Budget was not really afforded the type of eager anticipation we might have expected, other than the fact that it was Rishi Sunak’s first, and commentators were expecting measures which might mollify the effects of the Coronavirus. They were not to be left wanting.

With so much happening at once, we have decided to split this update into two main component parts. The first being what we hope will be a welcome update on recent market events, before highlighting the key changes in the budget

It is worth saying that events are moving extremely quickly so the first part, which represents our view of the financial markets, reflects our thoughts as at Wednesday afternoon (11th March). Events could easily unfold tomorrow or the day after, which cause us to alter our position. We also need to be mindful that events we are witnessing at the moment, can be, and very often are, seized upon by the media and this will almost certainly have contributed to the wild price gyrations we have witnessed over the past few trading sessions.

One final point before going into more detail, in our update of 28th February we were at pains to point out we are not virologists or immunologists so cannot say for certain what will happen, nor indeed how long before things return to normal. There are however several precedents we can draw upon, and history is usually a very good indicator for how events might play out in the future, but we will cover this more fully in a moment.

The rapid spread of COVID-19 to the west (and in particular Italy) is starting to concern investors as they try to assess the likely economic impact. The virus has a high replication rate, which means that anyone who has it can infect more people than they would with say, typical flu. This issue is complicated by the long incubation period which means detecting it is problematic; it is very hard to contain something you cannot detect.

China has approached this with some fairly draconian restrictions on travel and quarantining but this looks like it might have done the trick, with infection rates plateauing and employees starting to return to work. This approach looks to have been similarly successful in South Korea. Italy following this blue-print will also hopefully lead to a better containment.

Whilst all the talk is about factory shut-downs, we think it will be the services sector that bears most of the pain. Clamping down on public gatherings and travel is likely to hurt hotels, restaurants, exhibitions, airlines and leisure to name but a few. As things stand we think Q1 GDP will probably hold up, but there will be some pretty awful economic data to come in Q2 and beyond. It is this that markets are adjusting to. On balance we think the paralysis caused by the Coronavirus heightens the risk of recession for the US, but that is by no means a certainty.

All eyes are now on the policy response. We think in the UK this had for the most part been sensible and measured but today’s decision to cut interest rates seems premature. The Federal Reserve was, in our opinion, even more gung-ho in cutting interest rates last week. Neither the UK nor the US, but particularly the latter, needs lower interest rates and by reducing them, the authorities have effectively discharged all their ammunition prematurely.

But before we all get too pessimistic, history does provide some very useful precedents for the performance of financial markets with events of this nature, as the chart below indicates: 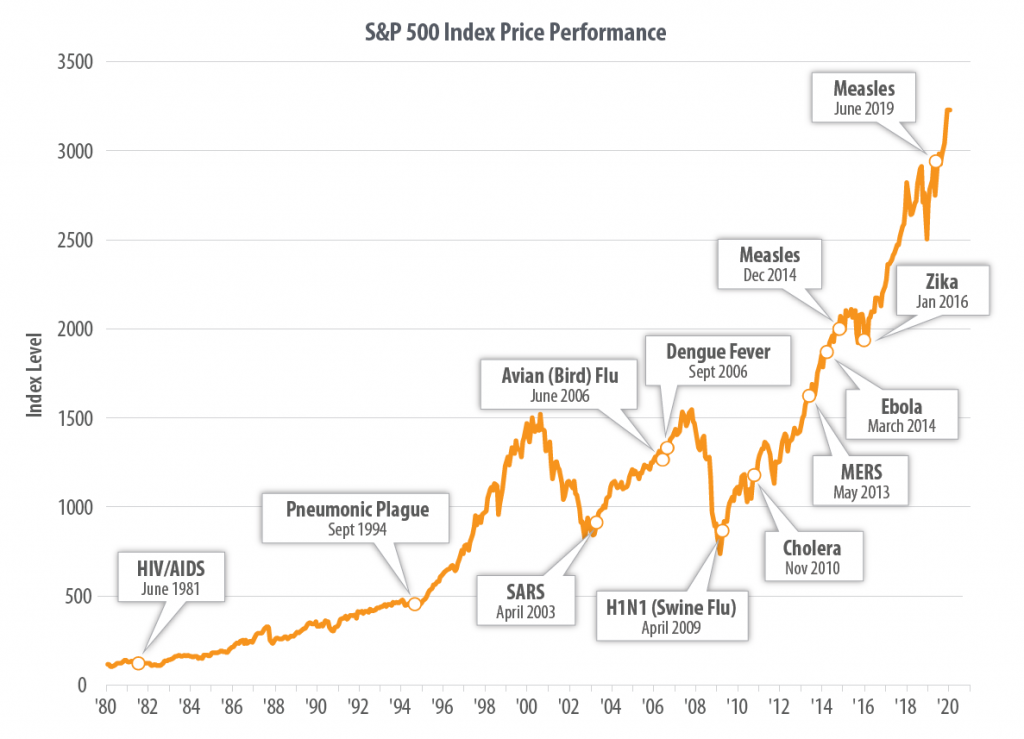 As you can see, since 1980 the market, as measured by the S&P500, has an excellent record of recovering from epidemic shocks. More recent examples such as SARS and Ebola have a significant short term impact on share prices, but seldom a lasting one. This time around we think policy-makers will do everything they can to try and reignite economic activity. This could be lower interest rates as the UK and US have done, but equally it could mean tax breaks, asset purchases or even helicopter money.

Of course financial markets were hit further on Monday by the plunge in the oil price. Having two seismic events impacting markets simultaneously is very unusual, so some type of reaction was inevitable. Demand for oil has been weakening for some time and this puts downward pressure on prices. In response OPEC wanted to cut production, a perfectly rational policy response in our opinion, but failed to agree lower quotas with Russia. Instead Russia see this as an opportunity to permanently damage North American shale production. Saudi Arabia in turn has taken sight at Russia and said it would increase production and offer discounts. This all conspired to drive Brent Crude down 30% and impact on already fragile markets.

Quite how long the Saudis and Russia can cope with a substantially lower oil price is anyone’s guess but we think the Saudis in particular need a much higher price, possibly around $80 per barrel. Russia appears content to tough this out and whilst their break-even price is lower, we think this still sits above the prevailing market price. This might be enough to drag Russia back to the negotiating table, but we doubt it. This is likely to reset the oil price into a lower orbit for some time yet, but it should be remembered that over the long run, a low oil price is actually good for economic growth.

Whilst equity markets have reacted negatively, bonds have benefitted. The yield on the US 10 year treasury fell as low as 0.3%, before moderating to 0.8%. The UK equivalent is 0.1%. Ten years ago it was over 4% ! In our opinion, and as we have argued for some time, this simply is not sustainable and the most recent strength in bond prices, merely serves to intensify the pain for investors when prices eventually go into reverse.

At CDC we have always argued that having a mix of assets is the best way of enjoying upside performance when things are going well, but limiting downside during stress periods. Whilst we favour equities (strongly) we do have a sizeable exposure to bonds and absolute strategies which together act as a counterweight to equities.

Within our strategy we have been far from idle. In 2019 we reduced one of the best performing asset classes from 2018 (property) in favour of emerging markets. Whilst this paid off handsomely in 2019, it has also added value over the past few trading days. Since 17th Jan, the US market has fallen 15%, South Korea only 9% and China even less at 6%. We also see the long term growth dynamic for investors emanating from the east, and for this reason we have, in the past 2 weeks, increased our exposure to Emerging Markets and Asia Pacific regions (except in CDC Cautious). We have also altered the slant of portfolios to capture what we see as an extremely cheap UK ‘value’ space.

One feature of dynamic management you will recall us talking about in the past, is portfolio rebalancing. This is a discipline we follow whereby assets that perform well are trimmed, in favour of those that have been left behind, to bring the portfolio structure back into balance. In extreme market movements like we have witnessed, we carry out this activity as part of our discretionary mandate. In practice, and in its broadest sense, this means we will have been selling bonds (which have done well) and added to equities (which have fallen) to exploit weakness.

Whilst we cannot precisely predict when markets will stabilise, stabilise they will, and as the chart below highlights, when we look at significant corrections in the past, this has generally been a precursor for strong bounce over the following 12 months:

Hopefully this is helpful to readers in explaining more about recent events, and what we have been doing at CDC to navigate these tricky waters. In times like this, all eyes turn to ‘the great and the good’, and in investment circles, there is none better than Warren Buffet, who said ‘be fearful when others are greedy and greedy when others are fearful’. This week has seen almost indiscriminate selling which is, in our opinion, a clear fear signal. In the 1987 film Wall Street, Gordon Gekko famously quipped ‘greed is good’. At the moment we are inclined to agree.

Chancellor of the Exchequer, Rishi Sunak, wasted no time in his maiden budget to address the ‘elephant in the room’ with a £30 billion package of measures aimed at offsetting the impact of coronavirus. Whilst acknowledging the virus represented a key challenge, with the potential for up to 20% of the workforce being side-lined at any one point, he was at pains to point out it was not the only one.

Despite being in office only 27 days, his message was clear. The virus has the potential to disrupt supply chains, impact demand and lead to an interruption to the UK’s growth trajectory, all of which most people would fully expect. He did however take a combative stance to say the Government would do whatever it takes to support the economy, promising further intervention if needed. This is supported by the biggest jump in borrowing since 2013. He said ‘I know how worried people are, we are doing everything we can to keep this country, and our people, healthy and financially secure.’

The chancellor set out a multi-billion pound three-point plan using a 3 Ts moniker (temporary, timely and targeted), which includes £7 billion to support businesses and individuals:

Mr Sunak said the total relief package was the most aggressive announced by any government so far.

The Debt Management Office (DMO) said it plans to issue £156 billion of gilts in the 2020-21 fiscal year. We have long argued that increased spending would in all likelihood be funded through further borrowing, and in terms of scale, it will be the largest issuance since 2013 but who can blame the Chancellor for tapping investors given such low yields, allowing him to borrow at next-to-nothing.

As a proportion of GDP, borrowing will jump from 2.1% this year to 2.4% and 2.8% in the next two years respectively, before falling to 2.5% the year after. The borrowing requirement was around £100bn more than expectations. Despite speculation that he would ditch the framework on spending set by predecessor Sajid Javid, the Chancellor said his borrowing fell ‘not just within the fiscal rules of the manifesto but with room to spare’. He did say however that he reserves the right to amend the framework later. All this aside, such huge supply hitting the market merely serves to reinforce our view that the long term direction for gilt prices has to be downwards.

In a sign of the scale of the challenge ahead, the chancellor announced downgrades to official growth forecasts, which cannot accurately take into account the full extent of the virus’s impact. The estimate for 2020 economic expansion was lowered to 1.1% which would make it the worst since the financial crisis, before accelerating in 2021 to 1.8%. There is £175bn of extra investment earmarked which would, all things being equal, add an extra 0.5% onto GDP, and according to the Office for Budget Responsibility (OBR) will boost productivity by up to 25%.

Other notable measures announced include:

Despite such a cavalier approach to spending and breathing life into the economy, the market reaction was muted, with financial markets barely changed as Mr Sunak sat down. Instead all eyes turned to Wall Street which opened sharply lower on disappointment that President Trump’s promised stimulus had yet to materialise and the World Health Organisation officially declaring COVID19 a pandemic. Sometimes, markets are just very hard to please !