Can Hunt avert a Red October?

Posted at 12:39h in Uncategorized by cdcwm

Since we published our last update at the end of September it has been quite a tumultuous few weeks for investors. And it is not just shareholders that have had frayed nerves. Sterling has been hammered and safety-first investments like gilts, have been far from defensive, but more on that in a moment.

Whilst stock markets have been volatile, it is perhaps surprising to note that since our last update, the FTSE100 index in the UK has fallen by just 1.4%. The US market has fallen by more (-2.7%) but it is the bond markets that have suffered most of the damage. Perhaps this should not surprise us, autumn historically has not always been kind to investors. Black Monday (1987), the Wall Street Crash (1929) and the collapse of Lehman Brothers (2008) all happened in September or October, but as we will hopefully demonstrate in the following paragraphs, there could be some, albeit feint, chinks of light at the end of the tunnel.

The former Chancellor Kwasi Kwarteng last week paid the ultimate price for spearheading Liz Truss’s tax-cutting plans. Unfunded tax cuts are unlikely to get the City’s seal of approval at the best of times, let alone when borrowing is already high and the Bank of England is battling inflation. In steps Jeremy Hunt, the fourth Chancellor this year, with the aim of redrafting the budget, getting the books to balance and just as importantly, restoring confidence in markets. He has quite a job on his hands.

On Monday (17th October), Mr Hunt’s first major announcement was to consign most of the planned tax cuts onto the junk pile and row back on some of the financial assistance with energy bills. It is early days, and the full rehash of the budget will not be known until 31st October, but this does appear to have mollified financial markets to some degree. As of Monday afternoon, the FTSE100 share index was up 1.4%, the pound rose 2% versus the dollar and gilt yields fell 0.4%.

Markets appear to have taken Jeremy Hunt’s sense of financial prudence on trust but this still leaves the ‘Sword of Damocles’ hanging precariously above the Prime Minister, Liz Truss. Her tax cutting agenda was ill-conceived and markets gave a harsh verdict on this, but standing behind such a pronounced u-turn completely undermines her credibility. She appears to be a PM ‘in office’ but not ‘in power’. That power appears to now rest with the Chancellor and it is hard to envisage Liz Truss being able to survive as Tory leader.

So where does this leave markets? The Chancellor’s plans will be presented on Halloween. It is not hard to imagine the headlines if Mr Hunt gets things wrong. The financial journalists will have a field-day. But the reality is markets will have to wait for two weeks and in the meantime, attention will revert back to the economic data, including inflation, and corporate earnings.

The chart below highlights just how difficult things have been for investors during 2022. Recent events in Downing Street have merely served to deepen the gloom.

It seems inevitable, there will be a recession in the UK and Europe. We may already be in one, it certainly feels like it. The US is likely to suffer the same fate, though probably in 2023 and we think they might escape with a shallow and less prolonged downturn. We have said before that financial markets are discounting mechanisms. By that we mean they adjust to known information and just as significantly, to things they think might (or might not) happen. In other words they anticipate.

Since COVID started to become less of a problem, inflation most certainly did, but monetary authorities around the world were slow to realise this. This has meant central banks have had to raise interest rates more aggressively and this is likely to damage economic activity and trigger recessions. During 2022 stock markets have been pricing in this reality. History suggests that downturns of this nature usually last about eleven months and result in a 25-30% fall in stock prices.

The S&P500 index in the US is down 25% since January and we are now in month ten of this bear (negative) market. By contrast a bull (positive period) market generally lasts five years with an average return of 160%. As the chart below highlights, some of the best times for investors typically follow right after the worst. 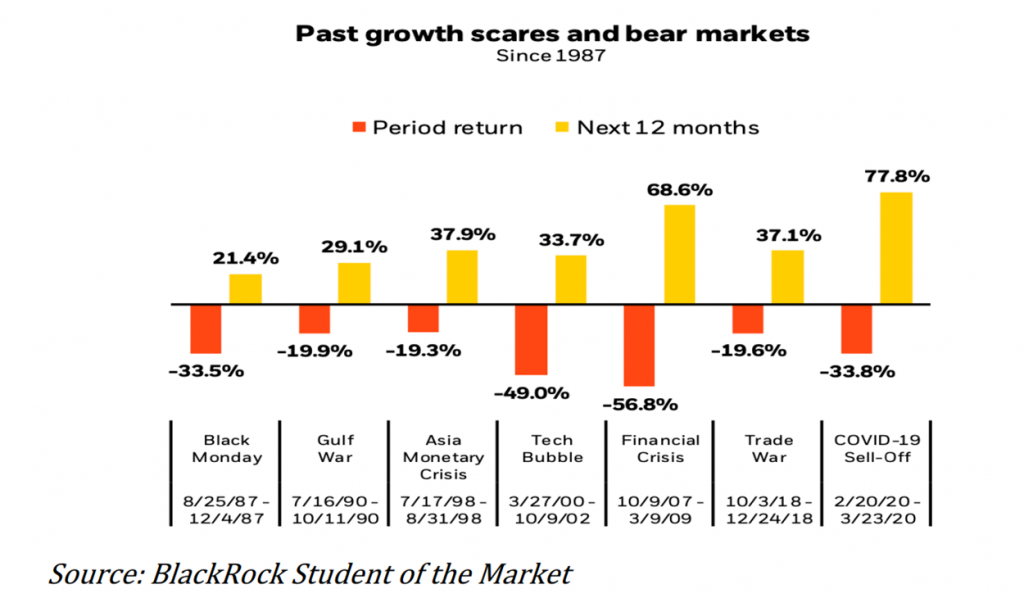 The issue for investors is two-fold. The first is that by the time the economy is actually in recession, the stock market is often pricing in brighter times ahead and this leads to the second point, which is that a significant part of any bull market return often happens during the first year or two after the downturn. In other words, recovery is front-loaded.

But as we said at the start, 2022 has not just been a tale about equities. Bonds (including gilts), which are often lauded as safety investments, have taken a bashing. The chart below, highlights the yield of the 30 year UK Government Bond: 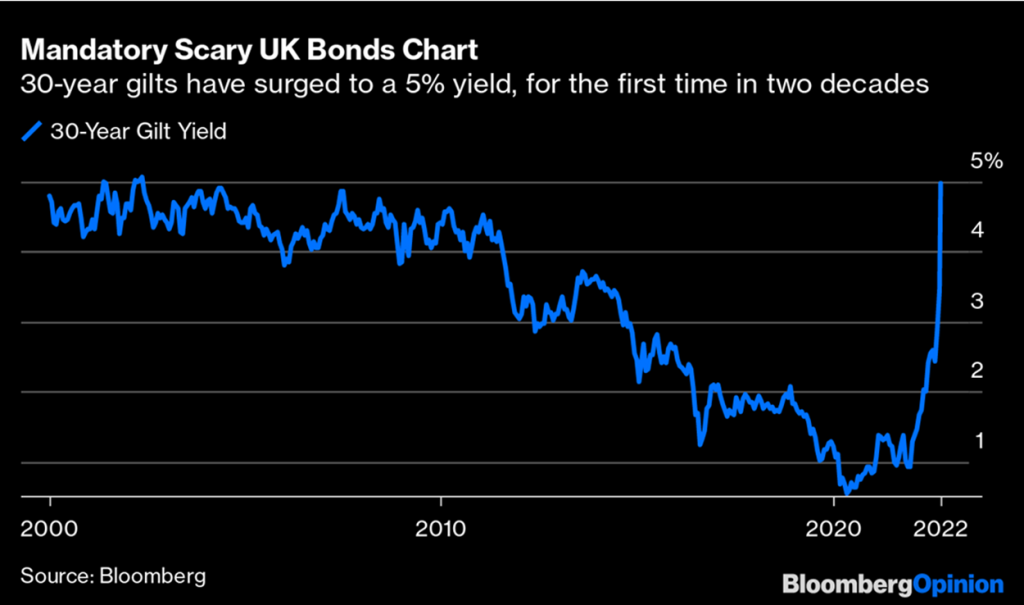 As you will see, the downward trajectory in yield between 2000 and 2021 came to an abrupt halt this year. This represents the demarcation between a low inflation, low interest rate environment and what we have now. Following Mr Kwarteng’s budget, the yield spiked up to 5% on the (correct) belief the package would be inflationary and lead to more borrowing.

Of course, when the yield rises, the price falls. In fact, according to analysis by Deutsche Bank, it fell to such an extent that all the gains attributed to bonds for the past decade were wiped out. To have a negative 10 year return on bonds is unprecedented in peacetime. The bond conundrum is not limited to the UK. US bonds have just been through their worst one and three year periods since the 1920s. US bonds are negative over a four year period for the first time ever.

So the question for investors is how much higher yields can rise, and how much more prices can fall. The answer to this is ‘it depends’. Bonds are very sensitive to inflation and in turn interest rates but just as equities anticipate future events, so too do bonds. In fact bonds are often regarded as the older, wiser brother of stocks as they have superior predictive powers.

In the short term, if Jeremy Hunt can stand up on 31st October and reassure markets that he is being prudent and working in tandem with the Bank of England, rather than against it, we can see yields edging down and prices recovering to some degree. Longer term however, the fortunes of bond holders will be ordained by the inflation picture. We believe we are close to peak inflation, if not already past it. Several components of the inflation picture are starting to ‘roll over’ but the Bank of England (and the Fed in America) will likely continue to press on with rate rises for the rest of this year and will probably keep rates artificially high into 2024 until they are convinced inflation is back under control, even if this prolongs or deepens a recession. Inflation remains public enemy number one.

Any signals that inflation is peaking or that the recession is nearing its nadir, will herald a return to an interest rate cutting agenda and that will be very supportive for bonds. On balance, we do still prefer equities to bonds but if we believe yields are artificially high as they were in the wake of the failed mini-budget, we will add to our underweight positions. Whilst we are not in the game of taking huge risky positions, we are very keen to exploit any pricing anomalies through rebalancing portfolios. One such rebalance was made across all CDC profiles at the end of September, and we will do so again when opportunities present themselves.

In the meantime, the sensible strategy is to remain fully invested and exploit the early part of the recovery when it arrives, which it surely will.