Don’t ‘bank’ on dividends just yet

Posted at 10:12h in Uncategorized by cdcwm

We have always argued that financial markets, all of them, not just equities, are driven by two pricing mechanisms. In the short term prices are affected by ‘momentum’ which is heavily influenced by sentiment. Over the longer term asset returns revert to mean. This means that despite short term price gyrations brought about by investor behaviour, returns ultimately fall back to equilibrium. Put more simply, if the long run return on stocks is 5% above inflation, over time it will find this level again. This has spawned the adage that ‘in the short term the market is a voting machine, but in the long run it is a weighing machine’.

This is relevant to the situation we have found ourselves in during the COVID19 crisis. During the darkest days of the crisis, we said that despite the severity of the lockdown, equity markets in particular were pricing too much of a ‘doomsday’ outcome. The recovery in prices since the end of March has been quite remarkable, and has surprised even an ardent ‘bull’ like me. The chart below looks at rolling 50 day price changes in the S&P 500 (US market) since 1952 and shows that we just happen to have gone through the best 50-day stretch in recent history: 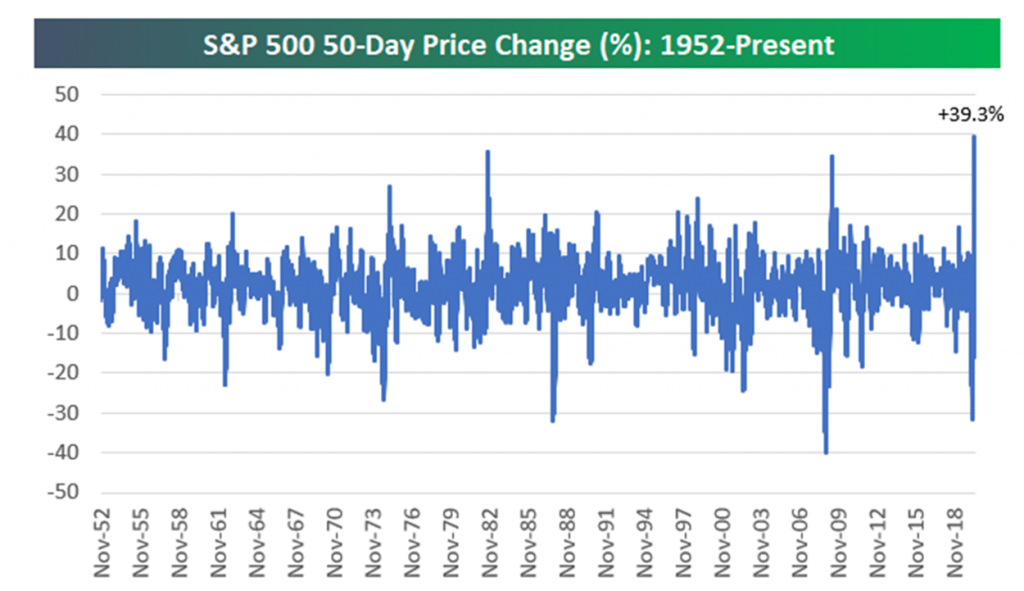 Previous high points in 1982 and 2009 both followed severe downshifts but in each case the recovery was followed by a lengthy bull-phase. The UK lags slightly further behind due to the composition of its index, which we covered in our last issue, but not by much. The FTSE All share (broad index) has rebounded 31% over this time.

In terms of how this has played out within CDC portfolios, we will be writing to all investors in July with their respective half yearly profile report, but in the interests of brevity, I just wanted to say a few words about the Balanced profile, purely because this is our ‘middle of the road’ strategy. During the first quarter of 2020, for all the reasons we have discussed over the past few weeks, investors suffered a negative return of -18%. Not the sort of return anyone wants to see, but crises like this do come along from time to time. That said, CDC Balanced has shielded investors from the worst of the market decline. The FTSE All Share fell 26% during this time. Over the first two months of the second quarter (April and May only), the index had recovered by 8%, an encouraging rebound, but over the same period CDC Balanced had returned 12%. The question is, can this recovery be sustained?

When I did my MBA, a number of years ago, one of the Professors at the business school I attended would more often than not answer questions that relied on a large number of variables with the standard response, ‘it depends’, and this became the de facto business school response. In terms of response to the question about market direction from here, it seems particularly apropos.

It depends because there are potentially opposing forces at play. On the one hand, investors are sighing relief that the lockdown around the world appears to be easing and as a consequence some of the high frequency data appears to be showing signs of improvement. But there is no denying one of the key drivers for equity markets has been compromised, and that is the substantial cull of dividends by corporations. For share prices to continue rising in the long run, dividends will have to be reinstated, but this will only happen when boards feel it is prudent to do so.

This dependency is even more acute in UK where Banks account for about 9% of the FTSE100. Since the global financial crisis, banks have struggled to shake off the stigma of being a corporate pariah. Seen as the cause of the crisis a decade ago, the Prudential Regulation Authority (PRA) saw this as a chance for redemption, even if the banks themselves didn’t. The PRA felt in the straitened times of COVID19, paying dividends was immoral, so applied the emotional thumb-screws and the banks duly obliged by pulling their dividends. Unsurprisingly bank shares were hardest hit during the crisis as sector performance relative to the market for the 3 months to the end of May (source: Datastream) highlights: 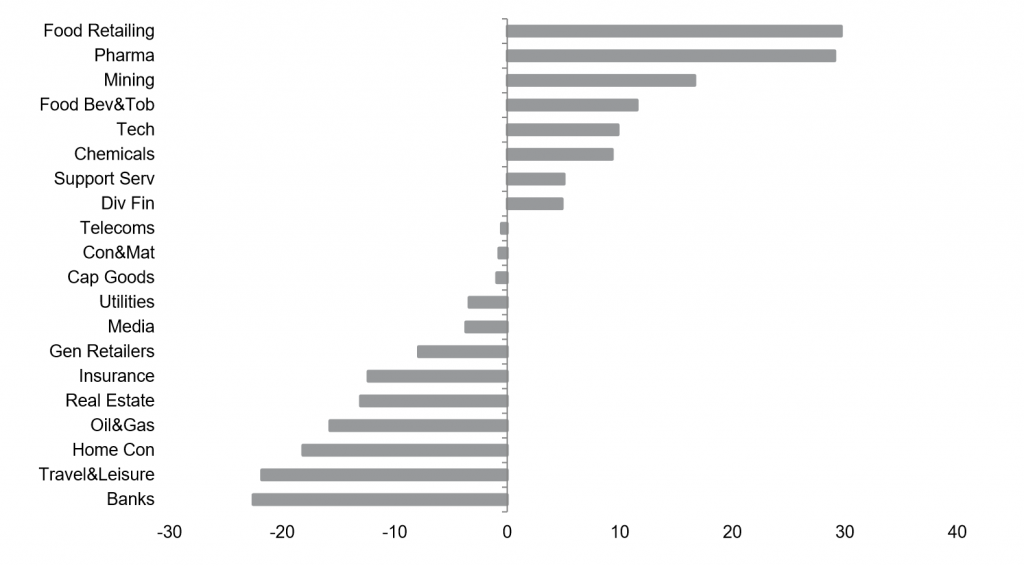 Whilst the early stages of the recovery in share prices was quite concentrated on just a few sectors, technology being one of the most talked about, since the start of June this has taken on a broader hue, with some of the most unloved sectors starting to take over the running. This is encouraging for the foundations of the market rally and banks have been integral to this. Both Lloyds and RBS, have bounced by 30% in under three weeks but the question which remains is how soon dividends can come back on stream. Optimists suggest the recent moratorium represents merely a deferral and dividends will be made good next year. We think this is too optimistic but neither do we agree with the most downbeat view that dividends are still a further three years down the line.

In summary, momentum appears to have swung but this is a short term driver. Company earnings and dividends are needed for this to truly be a reversion to mean. The added complication to this conundrum is that according to Columbia Threadneedle, between 80-90% of equity trades are ‘machine generated’ and triggered by algorithms not traders, meaning reading the ‘mind’ of the market has become more difficult. So in answer to the question of how sustainable this rally is, the textbook answer appears to be ‘it depends’.