From Russia. With Love ?

Posted at 14:24h in Uncategorized by cdcwm

It is only a fortnight since we wrote to CDC customers with their half yearly Profile Report. In it, we were able to look back on 2021, and reflect on what had been a very successful year for investors. How things have changed in such a short time.

Turning on the TV news and seeing the build-up of Russian troops on the Ukrainian border will naturally make investors nervous so we thought you might welcome an update from CDC, with our own take on events, what it might mean for investors and how we plan to navigate the issue.

The first thing to point out is that geo-political events are nothing new and even if tensions in the region were to blow over, the issue of China and Taiwan remains, North Korea, Middle East, the list goes on. That is not to denigrate the significance of the Ukraine situation, quite the opposite, but events of this nature do invariably have a marked impact on financial markets, but seldom a lasting one, as the chart below shows: 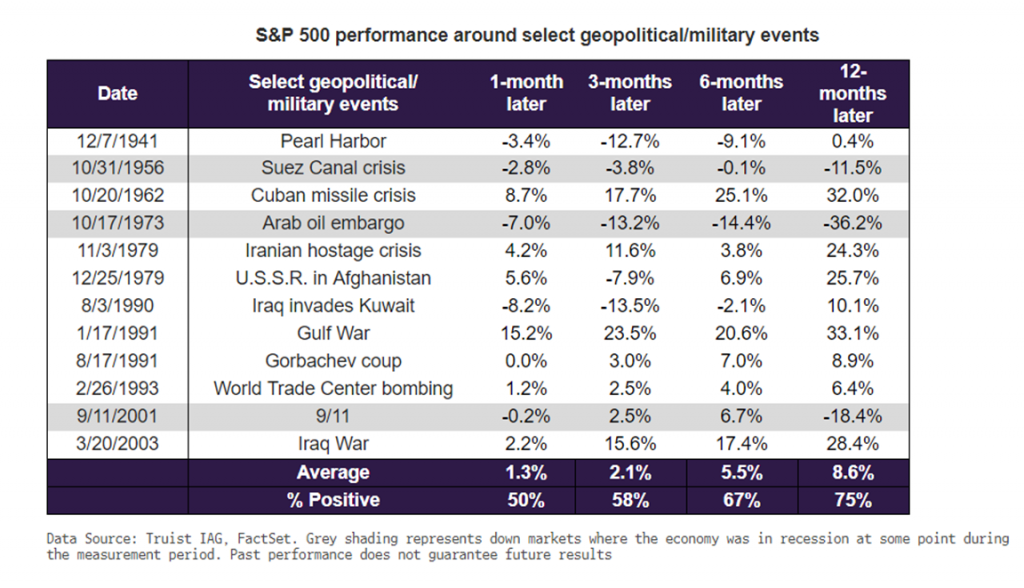 History tells us that falls (for any reason, not just geo-political) in the equity market of 10% or more are not uncommon but are made up within a month more than half of the time, and almost always within 12 months.

Whether Putin finally gives the order to advance on Ukraine is anybody’s guess. At the time of writing, there does appear to be a modest thawing, with Russia rolling back some troops. This could be brinkmanship, but equally he might want to delay any invasion until after the Winter Olympics to avoid embarrassing China, which remains (for now) an ally. That, or waiting for the ground to firm up, as a mild winter has made the land too soft for military hardware. Not invading at all after such a big build-up of troops, arms, and equipment, strikes us as making it tough for Russia to bluff in the future.

His rationale for targeting Ukraine is likely geographical but has its origins dating back hundreds of years. One might be forgiven for thinking that nobody is interested in attacking Russia, but that is not how Russians see it. It has been invaded by Poland (1605), Sweden (1708), France (1812) and Germany twice in the 20th century. Russian leaders often see their mandate as protecting sovereignty.

But Russia is vast. Twice the size of the USA, five times the size of India and seventy times bigger than the UK. Geographically traversing Russia eastwards, over the Urals, leads to Siberia and ultimately the Bering Sea. Even today crossing this huge land mass by train takes six days. Russia has not been invaded from the East since the 13th century and Moscow lies to the West of the country so leaders spend most of their time looking West, not East.

After the second world war, Russia occupied territory previously captured from the Germans in Eastern Europe, some of which became the USSR. NATO was formed in 1949 to deter the threat of Soviet aggression. As a consequence of NATO, the US can now position troops only a few hundred miles from Moscow. Putin blames Gorbachev for undermining Russian security and refers to the break-up of the Soviet Union under his tenure as the ‘major geo-political disaster of the century’.

Since the Gorbachev era, Russians have looked anxiously West as NATO has crept ever closer incorporating countries Russia claims had promised never to join. Poland, Hungary and the Czech Republic joined in 1999, followed by Slovakia, Bulgaria and Romania in 2004. More depressingly for Russia, former Soviet states such as Estonia, Lithuania and Latvia joined at the same time.

This note is not intended to be a history lesson, but perhaps it does illustrate why Putin is so hung-up about Ukraine wanting to become part of NATO. Delving back further into the history books, the first Tsar, Ivan the Terrible, had a mantra of attack being the best form of defence. Maybe Putin thinks that too.

The current tension comes at a difficult time for the world economy. Recovery from COVID is clearly evident and inflation appears to be getting out of control. The reading in the UK is north of 5%, the same in Germany and in the US it is over 7%. There are a number of contributing factors to this, but one of them is energy prices and disruption to the supply of natural gas from Russia in the event of conflict will fan the inflationary flames even harder.

Normally in times of uncertainty, investors flock towards bonds but this time there is a problem, one we have highlighted several times before. In the UK, over the past two weeks, yields have continued to rise (prices have fallen). In other words we have not (yet) seen the huge influx of capital into safe-haven assets. The reason is the yield on the 10 year Treasury sits at about 1.6%, which is not much consolation to investors if inflation is running at 5%. The situation is even more acute in the US as the Federal Reserve is badly behind the curve in getting inflation under control. This means that interest rates will have to rise and the longer the Fed leaves it, the more aggressive they are going to have to be. This is not good for bonds.

In the January Profile Report, we said inflation was the key indicator to watch in 2022. We remain of this opinion and the situation in Ukraine has the potential to make us even more convinced of that. But not all asset classes are hurt by inflation. Sure, investors can opt for index-linked gilts in the UK (or TIPs in the US) but one of the best inflation hedges over time has been equities. Despite the situation on the Ukraine border, we do not see this materially impacting corporate profits for the long run and economic recovery from COVID is still at a relatively early stage.

Of course, it does look like the situation will remain tense, and that will create uncertainty for investors. Stock markets will remain volatile for now, but we see any downdraft as temporary and actually creating a buying opportunity for those with a long term time frame in mind. Finally, it is worth remembering that CDC portfolios are constructed around what we call the strategic asset allocation. This is the long term framework of assets that will shape most of the return over time. As part of this we invest in bonds (though we are deliberately underweight), UK stocks, international stocks, property, infrastructure and absolute return. Having this mix makes sense at the best of times, but especially so now.

We do not invest in anything opaque, trendy, illiquid or hard to comprehend. Instead we invest in quality funds, with world-renowned organisations, which are picked only after a rigorous selection process. These are then monitored using a mixture of quantitative and qualitative evaluation techniques and those that fail to maintain the grade, are ruthlessly culled.

At present, we propose no action on asset allocation, and we are happy with the vast majority of our fund selections. We did make reference in the Profile Reports to one or two we were casting a critical eye over, but we will only make a change if it demonstrably improves the efficiency of the portfolio.

For now, markets will remain choppy unfortunately, and this could see our performance becoming ‘detached’ from the benchmark in the short term. This is because despite us using a variety of assets, we tend not to weight each one precisely in line with other managers. Investors should not be concerned by this as over a longer time frame, it is our aim to outpace the industry average, something we have been successful at doing. Naturally, if the current market gyrations persist, we will reinstate these newsletters in the interests of keeping investors informed.