How Kim Kardashian can give a CEO sleepless nights

29 Oct How Kim Kardashian can give a CEO sleepless nights

Posted at 12:47h in Uncategorized by cdcwm

The article below was written on 27th October and prepared for issue the day after, on the very day US markets went into tailspin. The S&P500 fell 3.5% yesterday on election uncertainty and the continuing battle with containing COVID, alongside the potential for further economic damage caused by new lock-downs.

We feel the article below still remains very relevant so the decision was made to go ahead and publish it and we will see if yesterday’s fall in the US was a ‘knee-jerk’ or the start of another more protracted downdraft. It is too early to say which it is and we will know a bit more when Wall Street opens this afternoon.

Stock movements in the US were enough to drag the UK FTSE-100 down by 2.5% yesterday as well, which is a sizeable, though not unusual, daily movement. Things have stabilised this morning with the UK index up slightly. We will see how things develop in the next few days and issue another update early next week.

It is worth remembering that all of CDC portfolios are diversified across a number of assets classes and are not reliant on any particular region. This spread insulates investors and means they seldom experience a downturn of the size associated with the headlines.

How Kim Kardashian can give a CEO sleepless nights

It is often said that one of the most reliable ways to beat the stock market is ‘value’ investing, an issue we have discussed in previous editions. The notion that investors should buy stocks for less than they are worth intrinsically was postulated as long ago as the 1930s by American economist Benjamin Graham and adopted by luminaries such as his pupil Warren Buffett in the years since.

At its simplest, the thesis holds that stocks which are cheap compared to their book value (or some other sensible valuation measure) will do better over time. Generally, when investors buy a stock that’s cheap, it is in the hope that it will get more expensive, relative to its fundamentals and generate a return. The problem is that globally over the last few years, cheap stocks have got decidedly cheaper still. In fact, the ‘value’ area of the market has underperformed by so much and for so long now, that the whole concept is being called into question.

In the chart below we can see just how this has played out during 2020 within the US S&P500 market. This shows the top 20 contributors to the index performance alongside the top 20 detractors.

As you will see (left side of chart), the S&P500 has been driven by technology, which has been a major beneficiary of us all spending more time at home, and healthcare stocks. Throw in consumer discretionary, as Americans have remained very committed to spending money during lockdown, and this accounts for almost all of the top 20 performing stocks. These three sectors represent the antithesis of ‘value’.

On the right side of the chart, the picture is different. These are the more classic ‘value’ plays and here we can see it has been energy and financials that have performed poorly. The UK market is more dominated by these traditional industries than the ‘younger upstarts’ of the US and this helps to explain the huge variance in performance from markets on opposite sides of the Atlantic.

But there might be a sting in the tail if this process goes into reverse. Many of the high profile technology stocks happen to be extremely profitable and well-run companies, but a Biden victory in the forthcoming election, could see these under scrutiny by the regulator. To get a sense of how severe an impact this could have, Kim Kardashian’s announcement recently that she was stepping back from using Facebook sent the shares tumbling. The value of the company fell by around $10bn in a day. This is equivalent to about the size of clothing retailer Next.

The other popular view on value stocks is that they perform well when the economy struggles, on the basis that stocks which are already cheap, and often pay high dividends, offer investors defensive characteristics and so won’t fall as far. The chart below which tracks the value area of the market against the US economy tends to contradict this, with only two occasions (circled) where value has performed well in the face of an economic downturn. Both of these occasions represented the bursting of a bubble – the ‘nifty fifty’ craze of the 1970s and the technology bubble at the turn of the century. 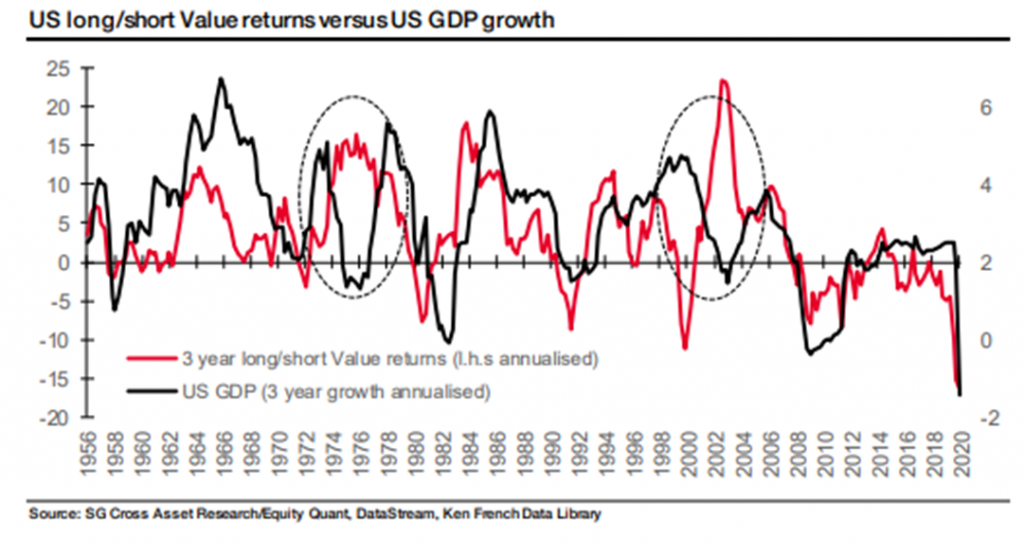 So the question for investors is whether the voracious appetite for growth stocks and antipathy towards value is here to stay. Certainly this has been the longest ever losing streak for value stocks but in previous cycles when value has underperformed, there has been an eventual switch-back. Our view is that, whilst it is difficult to pinpoint when a change of sentiment might occur, or indeed what the catalyst might be for this, we are reminded of the most dangerous phrase in investment circles and that is ‘this time it’s different’.

It rarely is, so we try to make sure all portfolios have a blend of styles, meaning that when value is friendless as it is now, there is a healthy weighting of growth to act as a counterweight. It also means CDC investors should not be wrong-footed when a reversal does occur.