The glum reality of good news

Posted at 11:55h in Uncategorized by cdcwm

Within our regular fortnightly communication last week, we did say we would write more fully once we had properly considered the setback to world stock markets which occurred last Wednesday, the day before we went to press.

There is a saying in markets, one of many it has to be said, that ‘you can have good headlines or cheap stocks, but not both at the same time’. How felicitous this axiom proved to be last week.

Wednesday’s 2% fall in the US sent markets around the world into a spin, with prices in London slipping almost 3%, before ending the day 2.6% down. But the damage wasn’t confined to one day. Markets had started the week in a slightly more cautious mood, with stock prices on both sides of the Atlantic falling by just under 5% between Monday and Wednesday. Blame was laid squarely on the fear, now realised, that the UK and Europe would be heading into a second lockdown and the inevitable economic damage that would cause. The chart below shows the picture relating to infections from March to October: 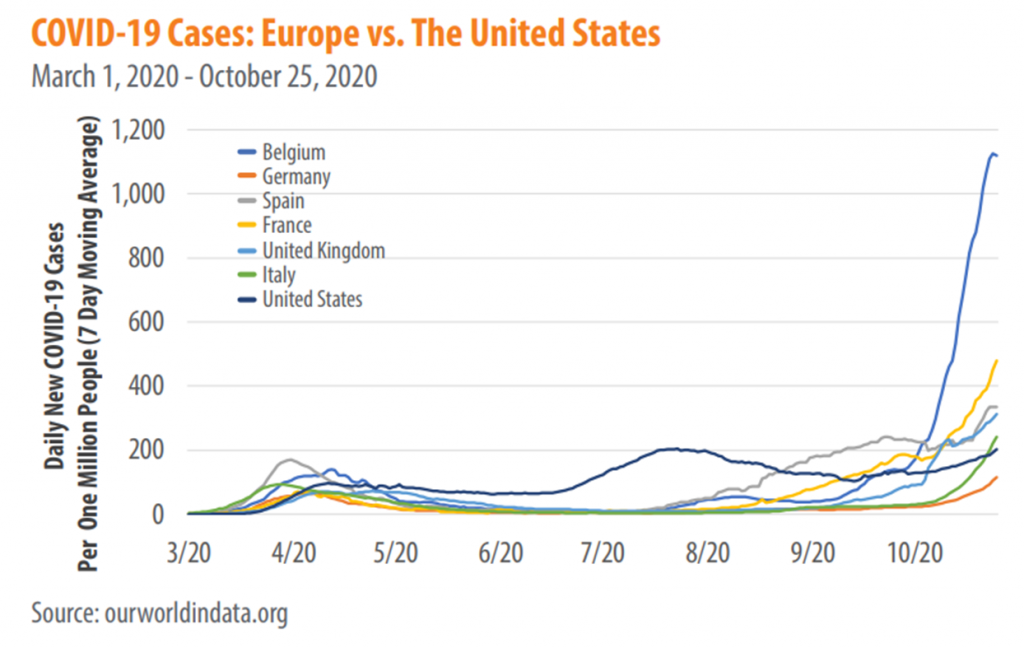 Last week’s fall represented the biggest jolt for markets since March, with investor concerns probably amplified by the proximity of the U.S. election, where the potential for a messy contested vote remains, and might even have increased in the last few weeks. This was slightly out of character for markets that had largely stabilised over the past few months.

But what is striking about this latest sell-off is that, for the most part, it was indiscriminate. If there is a theme to the three days when prices fell, it is that pretty much any assets where there was a profit to be taken, were sold down. Gold didn’t act as a haven, falling again on Wednesday and neither was Bitcoin, which also dropped after a great run. Small stocks sold off roughly as much as their larger counterparts and value and growth, which we talked about last week, did equally badly. There was little movement in bonds.

Within international stock markets however, a pattern is discernible. Europe had until recently appeared to deal with the virus better than the US and whilst this still holds true, infection rates have been climbing across Europe. The conundrum is that European assets were never particularly well rewarded for their relative success in public health policy, yet the worrying spike in infections across the region has dragged European stocks back to a five-month low. A case of heads you lose, tails you don’t win. The performance gap with the U.S. is still sizeable.

Back in March the conventional view was that a period of lockdown, which in essence amounted to a huge social experiment, would help to contain the virus with the hope of a V shaped recovery following. But it has been apparent for weeks now, that in the West at any rate, the virus is not under control. Actions being taken now will likely result in a ‘double-dip’ and change the shape of recovery from V to a W. It is looking increasingly unlikely the current situation around the virus will turn around quickly, unless of course we get some good news on a vaccine, and here the signals from the likes of Pfizer and Astra Zeneca are encouraging.

The picture in the East is different with New Zealand, China, South Korea and Vietnam all appearing to have suppressed the virus. The Chinese market for example is more than 20% higher than it was in March, almost 10% higher than where it started the year, and barely moved last week.

This graphic below shows the Vix index which was devised by the Chicago Options Exchange to measure implied volatility in stock prices. This is also affectionately known as ‘the fear index’. It is not uncommon to see spikes in volatility during crises and to be fair, the current index reading has risen to almost 40, but this is still only around half that seen during the global financial crisis and the onset of COVID in March. It is elevated, but not significantly so from the ‘normal’ range. 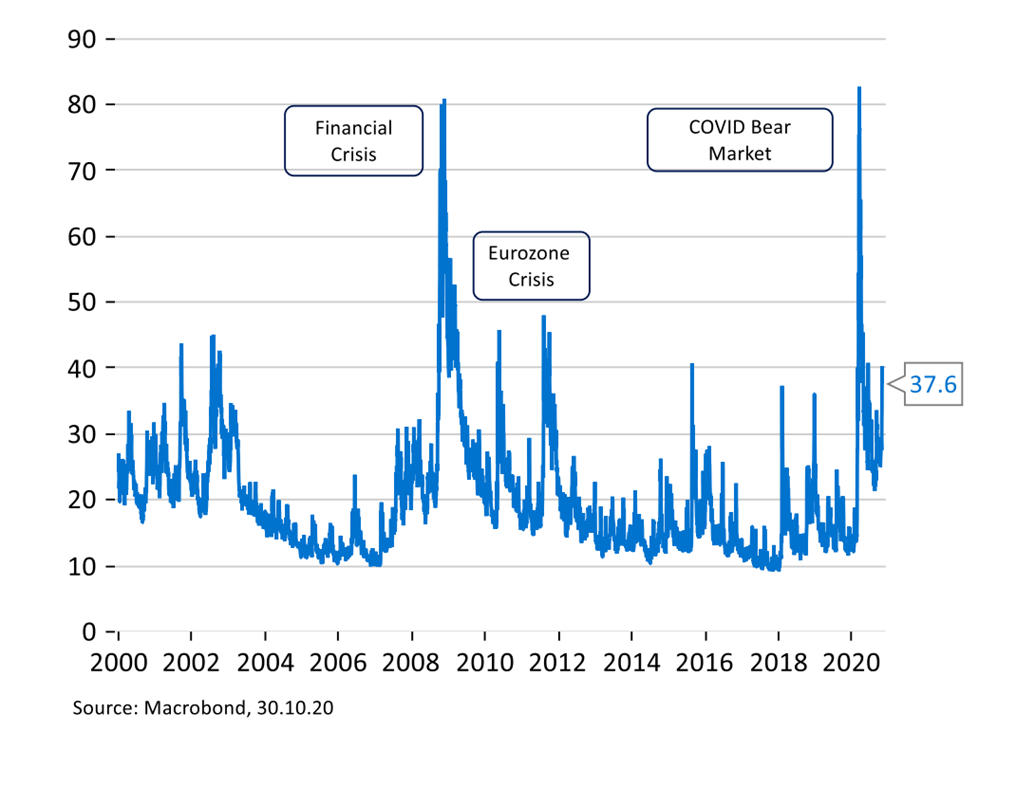 Periods of high volatility are often followed by a period of ‘wait and see’ for any aftershocks before positive sentiment returns. Once it was clear, for example, that the devaluation of the pound after the Brexit result hadn’t forced any big financial institutions onto the rocks, markets could return to normal. Whilst it is early days, the end of last week saw no further dips in world markets and the US, UK and European markets have bounced this week. The FTSE100 is up almost 4% this week so far at the time of writing.

We believe there is little reason to suggest the latest developments could get as bad as the two great crises we have witnessed this century, because the uncertainty is much less than on either of those occasions. For months in 2008, a full-blown collapse of the global financial system looked very possible. In March of this year, it was still reasonable to mark out a worst-case scenario in which Covid-19 matched the horrific human damage wrought by the Spanish Flu of 1918. The last seven months have taught us that it is possible to escape this virus with far more limited damage.

Whilst we all want the news to get better, and it will eventually, the inevitable consequence of this will be more expensive stocks. Time to buy now whilst stocks last!