Whichever way you look at things, 2020 should have been a year for politics. Instead, all the focus has been on COVID-19 and pretty much still is. Or at least it was until Tuesday’s first televised presidential debate in the US, which degenerated into something resembling a street-brawl.

For those that witnessed this rather distasteful encounter, establishing a winner and loser is tricky. It was so hard to understand what each were saying at times, it is doubtful whether anyone who was undecided before would make up or even change their minds as a result. Biden was probably happy that despite Trump’s attempts to agitate and unsettle, he landed no serious punches and he now has to survive only two more debates without being caught by a Trump haymaker. It is almost certain there will be a change to the format for the remaining two presidential debates.

Whilst opinion polls, and we all know about the fallibilities of these, have Biden slightly ahead, his lead has been contracting but the first debate will probably do little to materially change their respective positions by much. Certainly stock markets think not, as share prices hardly moved on Wednesday. 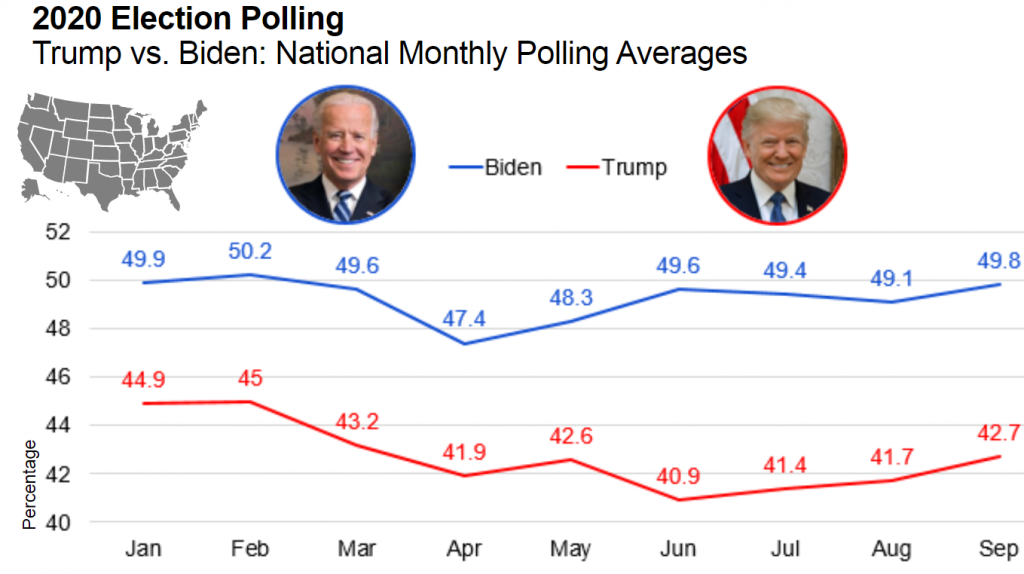 Historically when the incumbent party wins, as the chart below shows, stock prices tend to advance. Conversely, when there is a sense of a changing of the guard, this generally sees a market adjustment in the run up to election night, before a subsequent recovery. Biden’s continued lead in the polls with so little time before polling day might help to explain the near 6% fall in US stock prices since the start of September.

Debates aside, it is probably worth looking at why markets might feel a little nervous about a Biden victory. The Republican trump card (sorry I couldn’t resist the pun) tends to be economic stewardship, investors simply see Republicans as more business-friendly meaning in theory, the market response to a Trump victory should be positive. But this time around, Trump’s standing with voters has been compromised by the pandemic, the economic fall-out that has followed and his chaotic response. Moreover his attempts to boost his ratings have been met with criticism and seemingly when he seems to make headway on one crisis, he’s hit with accusations over alleged remarks about U.S war dead, or revelations that he might not have paid much in the way of taxes.

On the other hand, Joe Biden has made no secret of his intention to raise taxes and break up large corporates, particularly those where he feels they enjoy monopolistic positions, and many large technology companies will fall under this purview. Whilst the campaign is about more than taxes, it is worth looking at Democrat proposals as some are eye-catching:

Whilst a Biden clean sweep undoubtedly spells higher taxes, it is worth considering another very plausible outcome, which is a Democrat victory but where Republicans retain control of the Senate. This would make getting things done extremely difficult and would mean that most tax hikes were ‘dead on arrival’. The business case for a Biden victory is trade. He would likely be far more outward looking, less pugilistic and focused on forging better relations with both China and Europe. Certainly history supports this thesis and in fact, despite the Republicans being seen as more pro-business, stock markets have actually fared better during Democrat administrations in the post-war period.

As they say, a week is a long time in politics and with 32 days to go, a lot can still happen, but make no mistake, this is shaping up to be a bruising encounter and probably a very close election. Contested elections are often accompanied by a ‘defensive crouch’ by markets. This, and the failure to agree a further stimulus package, could additionally explain the profit taking we witnessed in markets last month. If things stay as they are now, we will see Joe Biden in the White House, but history suggests this is reason to buy, not sell.