Posted at 10:50h in Uncategorized by cdcwm

At the risk of sounding self-congratulatory, rewinding to our last update of 3rd November, the closing statement was to buy stocks whilst prices were, in our opinion, artificially low. The tenor of our last publication was that when the news is generally bad, stocks are cheap, and vice versa. Oh how things can change in a fortnight.

Our comments were intended to be slightly tongue-in-cheek, but anyone who did go out and buy a basket of UK stocks that day will have fared very well indeed, with the FTSE100 in the UK rising over 12% since we went to print. The central point being that stocks have responded to a diet of good news, which has been in short supply for much of this year. The two major influences have been the outcome of the US election and encouraging news of a vaccine.

Starting with the Presidential election, whilst the reaction in some parts of the US, and markets for that matter, has been that of a ‘fiesta’, the election itself resembled more of a fiasco. Not what we would expect from the largest democracy in the world. Fully two weeks later we still don’t know for sure what the eventual political landscape will look like as Donald Trump has refused to concede defeat and seems hell-bent on contesting the outcome. Election protocol is for narrow results to lead to an automatic recount, but citing Wisconsin as an example, such a recount found an error rate of a miniscule 131 votes. Thus we feel Trump’s attempts to legally challenge the outcome stand little chance of success, unless he can demonstrate wholesale fraud.

What we can say is that once Florida declared early, it became immediately apparent that the ‘blue sweep’ predicted by the opinion polls would not come to pass, and as we predicted in several of our communications, this was a close-run affair. Once again pollsters were left red-faced. Putting aside Republican protestations, it is likely Joe Biden will be sworn in as the 46th US President on 20th January 2021 but this is where things become a bit messy. The Democrats are unlikely to control the Senate.

The fate of the Senate will likely be determined by a state with fewer than 5m registered voters, Georgia. In early January, there will be two run-off ballots which the Democrats need to win to have any chance of controlling the Senate. Not controlling this will make enacting his change agenda extremely difficult for Joe Biden. Since the 1960s there have been eight run-off votes in Georgia and in seven, reduced voter turnout favoured the Republicans. The fear this time around amongst Democrats is that having seen Biden into the White House, the electorate feels this is ‘mission accomplished’ and do not vote in January. In the main electoral vote, Biden only won by 10,000 votes, so reduced turnout in January will likely favour the Republicans.

But herein lies something of a paradox. Before the election, investors were concerned that a Democrat victory but with a Republican controlled Senate, would be a bad thing, as it would lead to legislative gridlock. Whilst this might be true, markets have come around to the view that gridlock actually maintains the status quo. In other words, Biden’s tax rises are unlikely to gain any traction and he will lack the teeth to go after big technology companies. In other words, Americans should see less extremes in economic policy. This, coupled with his less bellicose attitude on trade, creates a sense of stability which markets tend to like.

There is a downside of course, there always is. The much hoped-for fiscal package to help cushion the economy against the impact of COVID, which has been running riot in the US, looks problematic, and will in all likelihood be severely watered down. But this has so far done little to dampen investor enthusiasm, with the immediate reaction being the best post-election surge in share prices in history.

Concerns aside, it is worth looking at what the two different political parties have meant for investors in the past and the results are quite surprising. According to First Trust (chart above), a $10,000 investment in 1949 at the start of Harry Truman’s second term would have risen to $76,000 if it had only been in the market during periods of Republican tenure. This rises to $296,000 for Democratic periods only, but a staggering $2.2m by remaining fully invested throughout. The bottom line is that whilst political regimes change, this should not unduly concern investors over the longer term. Moreover, Democrat governments are generally better for investors than Republican, however counter-intuitive this might sound.

Just when investors were pinching themselves that things couldn’t get any better, Pfizer’s announcement last Monday that their COVID vaccine was 90% effective (against estimates of 60-70%) sent share prices into orbit. On the 9th and 10th November alone, the FTSE100 rose over 6%. Some of the larger technology stocks fell, as investors locked in some profit and took the view that (working) life might return to normal. Beleaguered sectors such as travel, restaurants, leisure and hospitality rose by as much as 70-80%, the biggest one-day gains we have seen in living memory.

We have talked at length in these pages about the dichotomy within stock markets between value stocks (which have been unloved) and growth (which includes the likes of technology). It so happens we have been in the midst of the longest losing streak for value on record, but that went into reverse following Pfizer’s announcement. The chart below shows the relative performance of the Dow Jones Industrial Average, which tends to represent the more traditional value side of the market, with the younger more tech-laden Nasdaq. As you will see from the far right of the chart, last week saw the best period for value stocks since the tech bubble burst twenty years ago. 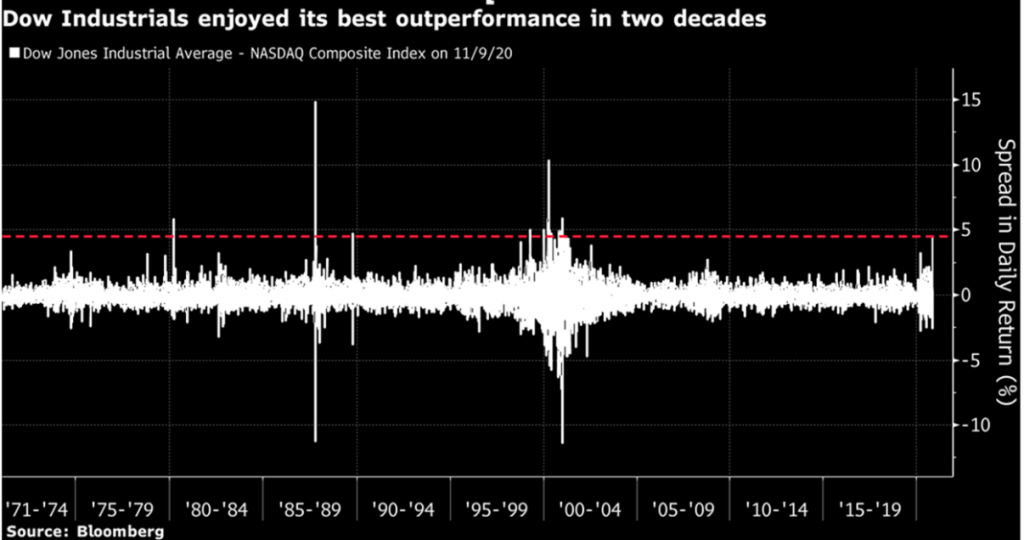 So, is this is start of the recovery? And will there be a levelling up of value versus growth? This is not so easy to answer. As far as the US election, it seems likely investors are going to have to live with some uncertainty until the Senate run-off is known in January but we remain convinced that a Democratic White House coupled with a Republican Senate is the most probable outcome. Sure, this creates policy inertia, but the market now sees this as a good outcome.

As far as the vaccine is concerned, this could be a game-changer. It does appear that the huge price gyrations we have seen in the past week are as a consequence of many investors being wrong-footed and scrambling to rebalance portfolios. But challenges remain. Approval of the Pfizer vaccine would need to be matched with a huge scaling-up of production coupled with challenging logistics, since storage needs to be at -70C. Added to which we cannot be sure how many people will want to be vaccinated. Today’s announcement that Moderna’s vaccine is 95% effective but can be stored at a more manageable -20C (and in a domestic fridge for a month) has sent a further message to markets that, whilst we are not out of the woods yet, we are nearing a point where we can get the virus under control. This is unquestionably good news.

Whether this leads to a sustainable shift back from growth stocks to value plays remains to be seen. It is certainly overdue. What we can say is that many of the areas shunned by investors, and which have been bashed by COVID, are now showing up on leader-boards. One casualty of all this encouraging news has been bonds. Whilst it is premature to be talking about COVID in the past tense, an effective and safe vaccine expedites a return to some kind of normality and that will provide a fillip to the economy. This is what is fuelling markets but, as ever, life is seldom as straight forward as ABC. Economic recovery, stoked by ultra-low interest rates, huge expansion in money supply and a return to consumer demand, will have one inevitable result; inflation. And that will be bad news for bonds.

Proof, if ever it were needed, that one man’s vaccine is another man’s poison.