Why an alphabet soup must now include Special K

26 Aug Why an alphabet soup must now include Special K

Posted at 13:20h in Uncategorized by cdcwm

As we edge towards September and the Coronavirus crisis enters its ninth month, the titles of the fortnightly CDC update appear, at first glance, to get more outlandish. This is not the result of cabin fever on my part, but in the case of this week’s contribution, is more concerned with trying to establish the shape of eventual recovery, once it takes hold.

Regular readers might recall some of our earliest updates when we talked about three key phases to how markets would react to the impact of COVID-19 – panic, stability and recovery. The panic stage is amply demonstrated to the left of the red dotted line in the following chart, which shows the performance of the FTSE-100 index since the start of the year:

Despite the emergence of second waves, we have been confident enough to call the panic stage as being over. This is not to say the market won’t go down from here, but we do not think we will re-test previous lows.

On the right side of the chart is what we referred to as the stability phase, which is where we believe we still are now. In the case of the FTSE-100, this seems to be in a ‘holding pattern’ of 6000 to 6300 but just as importantly, any recent downward shifts to the 6000 level have been met with substantial support, which we feel is encouraging. The final stage is recovery, and this is where alphabet soup comes in.

Economists and market analysts tend to talk in terms of letters to signify the shape of the eventual recovery when it comes. Some of the following are most commonly cited:

V – what most investors tend to hope for, it signifies that the eventual recovery will be as steep and rapid as the downturn. It needs to be remembered though, in numerical terms, if the market falls 50%, a 50% rise from the low point will only leave the market at 75% of its starting value. The S&P index in the US has experienced a V.

W – a variation on the V shaped recovery, though there is a double-dip, before things eventually normalise.

U – signifies a sharp fall followed by a more protracted period of bumping along the bottom, before a fairly swift upturn.

L – associated with a sharp correction but a much more protracted and pedestrian recovery. A variant of this is the ‘square root’ shaped recovery where we see a strong initial recovery followed by a flattening out. We see this as the more likely path for the UK market as things stand.

Of course the shape of the recovery tells us nothing about when it is likely to start. This is compounded when the recovery is bifurcated across different assets, styles or even geographical areas. Enter the K shaped recovery.

The best way to illustrate this is a chart showing the difference between two different styles of investing, which we have covered in previous bulletins, value and growth. 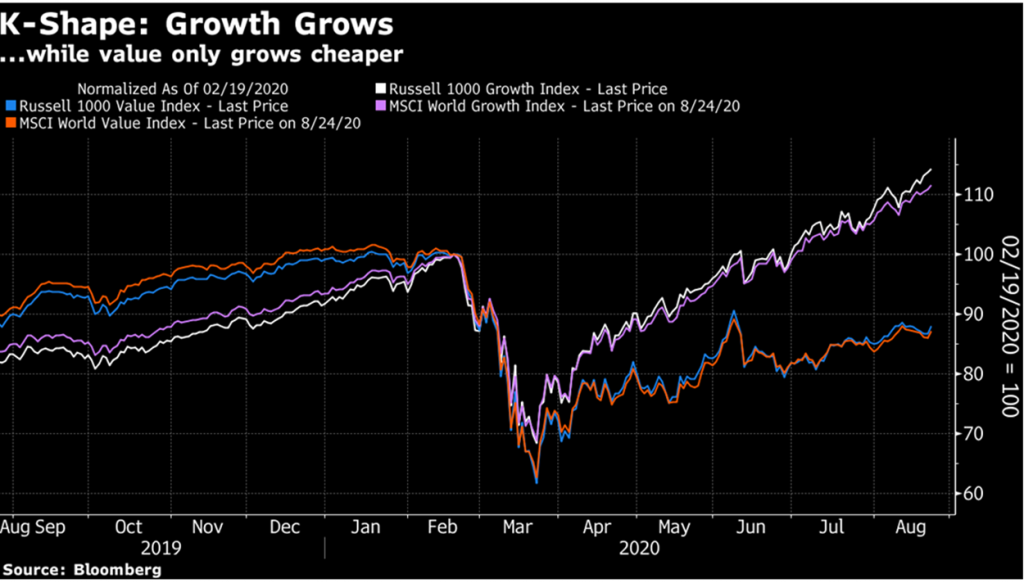 Value stocks (red/blue) tend to be more traditional, historically reliable, but also regarded as a bit staid. Examples include banks, cyclicals or utilities. Growth stocks (mauve/ white) tend to appear more expensive at face value, but offer much more exciting growth prospects into the future. Examples here include the FAANG stocks (Facebook, Amazon, Apple, Netflix and Google). As the chart shows, growth stocks have powered ahead since the low point in March whereas value, whilst off their lows, have been left behind. This dual-track recovery gives rise to the K shaped recovery, which I have circled in the chart. Admittedly it is not a perfect K, but it hopefully illustrates the point.

The COVID-19 shutdown and home-working have brought the investment case for growth stocks to the fore, and rightly so in our opinion. The FAANG stocks are growing revenues rapidly, they generate huge amounts of cash and they have healthy balance sheets which is a far cry from where technology stocks stood during the dot.com boom of 1999-2000.  But investors need to exercise an element of caution.

A case in point is Tesla. An investment of $1000 in Tesla at flotation (2010) would now be worth over $105,000. This values Tesla at more than the rest of the US auto sector combined. It is now also worth twice as much as Toyota, yet the Japanese firm produces thirty times as many cars. Anyone buying Tesla shares today will pay 212 times 2021 projected earnings or to put it another way, it will take an investor 212 years of earnings to recoup the cost of their shares. The average for the US stock market is 20.

Does this make Tesla shares expensive? Well the answer is probably but not necessarily. The share price is justifiable if the company can grow its earnings by 30-40% per annum for the next 10 years. This is possible but not very unlikely. Amazon too, the doyen of growth investors, sits on a precariously high rating. If it can grow earnings 10-fold over the next 10 years it will sit on a price/earnings ratio of 70. Less than Tesla but more than 3 times that of the wider market, and that assumes continued stellar growth. Today Amazon trades on 160 times earnings. This is stratospheric but helps to explain the K theory.

What does all this tell us? The starting point is the shape of the eventual recovery might not be consistent. Just as there is a bifurcation between value and growth style assets, so too is there between the UK and US stock markets, with the US accelerating away. Moreover, it could be that the true shape of recovery might only be determined after it has occurred. In our view, the UK market in particular is still in the stability phase but an early vaccine could change the growth trajectory significantly, from L to V for instance. Investor sentiment might also have a part to play. There is evidence that investors are directing capital to money market funds, which is a euphemism for cash. We see this as dry-powder which will eventually find its way into stocks, and that too could alter the recovery pattern.

The late Canadian academic Laurence Peter said that an economist is an expert that will tell you tomorrow, why the things he predicted yesterday, did not happen today. In the case of calling the time and shape of eventual recovery, this might be best answered another day.