Why creating a vaccine can be a thankless task

22 Dec Why creating a vaccine can be a thankless task

Posted at 12:19h in Uncategorized by cdcwm

This note was prepared before the fall in the markets in response to London moving into tier 4 and UK borders closing. As of 21st December the FTSE100 has fallen 2%, if this marks a return of continued volatility we will of course maintain our fortnightly communication (*see below)

The year-end provides a timely full-stop

We first put pen to paper on these newsletters in March of this year, initially weekly and then reverting to fortnightly. Over twenty issues later, with financial markets having first stabilised and then clawing back much of the deficit registered in March, we feel the time is right to reduce our output and the year-end provides a natural stopping-off point.

The sole purpose of these briefings was to provide insights and hopefully some reassurance to our customers during very uncertain times. We sincerely hope you found them helpful and it goes without saying that if markets take a turn for the worse in the future, for whatever reason, we will be quick to reinstate them*.

Below we provide our up-to-date thoughts on the market recovery and our next communication will be at the end of January when we will issue our half yearly report for your chosen investment profile.

Why creating a vaccine can be a thankless task

Even from an early age I’m sure we can all remember being told to end essays with a summary or conclusion, a practice we tend to carry on into higher education and ultimately, if we write reports, the workplace. There is no denying that 2020 will go down as a year to remember. Or more likely, one most will want to forget. Whilst investors had to contend with three major inflection points – COVID, Brexit and a US election, it will be the first of these that will have occupied peoples’ thoughts, and certainly had the biggest impact on financial markets. With this in mind we wanted to use our final fortnightly bulletin to present a reflection, looking back at how some of the things we predicted actually played out, or not as the case may be, and how this might shape the investment scene going forward.

Back in the Spring one of the academic journals wrote an article on the use of the word ‘unprecedented’, which tends to (wrongly) get thrown around when events are merely unusual, rather than truly ground-breaking. The use of the word reached record levels in 2020 but this time with good reason. This year, as the severity of the virus became apparent and businesses were forced to close, the economic hit was like nothing seen before. It was the sharpest economic contraction on record and financial markets inevitably took fright. The market decline was not unprecedented, but it was about as severe as they get. By way of an example, by mid-April, equity markets had registered a 32 day run without back-to-back rises, the worst since 1931.

During times like this two things tend to happen. Investors have a strong tendency to cash in their chips and run to safe assets like cash or bonds. Our job as professional wealth managers is to try and convince them this is seldom a wise move. But wealth managers themselves can fall prey to what we term ‘activity bias’ or put another way, the feeling they should be doing something. Let’s consider each of these phenomena in turn.

From the onset of the crisis, our messaging has been pretty clear, that investors should stay put. It might seem trite, but the key to successful investing is ‘time’ not ‘timing’. What we mean by this is the investor seeking to jump in and out of stocks in an attempt to avoid downturns, yet be invested for upswings is the stuff of movies or TV like Wall Street or Billions – great viewing, but in reality it seldom works. This is because it involves getting a whole series of decisions right, with precision timing thrown in, and that goes hand in hand with an incredible slice of good fortune. How many of us could stand at the roulette table and consistently call red or black correctly?

In March we said we thought the market was ‘closer to the bottom than the top’ and whilst this is not the most insightful piece of analysis, it was quite prophetic. On the 18th March, when we made the comment, the FTSE100 stood at a fraction under 5300. It bottomed out 5 days later at 4900. By mid-April we had reached the view, declared in our 15th April update, that the initial panic phase of the market downturn was behind us. In hindsight, it was actually over by the end of March, but putting that aside, in mid-April the FTSE had recovered to 5800 and has since powered on to 6500. Not only has this been one of the most savage downturns, it has been one of the fastest recoveries.

Keen observers will also see from the FTSE100 chart above another trend we pinpointed which was before we could witness any sustained recovery, we would need to see a period of stability. For much of the summer and into the autumn, share prices traded within a pretty tight range either side of the 6000 mark. This was a key way-marker for us and not untypical of what we have seen during previous crises, where the first 3-4 weeks is when investors feel most of the pain, though things have usually calmed down within 7-10 weeks.

If we take a moment now to consider activity bias. Whereas retail (private) investors have shown a historic tendency to sell when things are looking less rosy, professional managers are blighted by the compulsion to be doing something, when in reality, sometimes the best strategy is to ‘sit on ones hands’. At CDC we have followed this maxim and aside from rebalancing of portfolios, we have made only two significant moves and that has been to double-down on our commitment to Emerging Markets and to introduce (and subsequently add to) Asia Pacific. 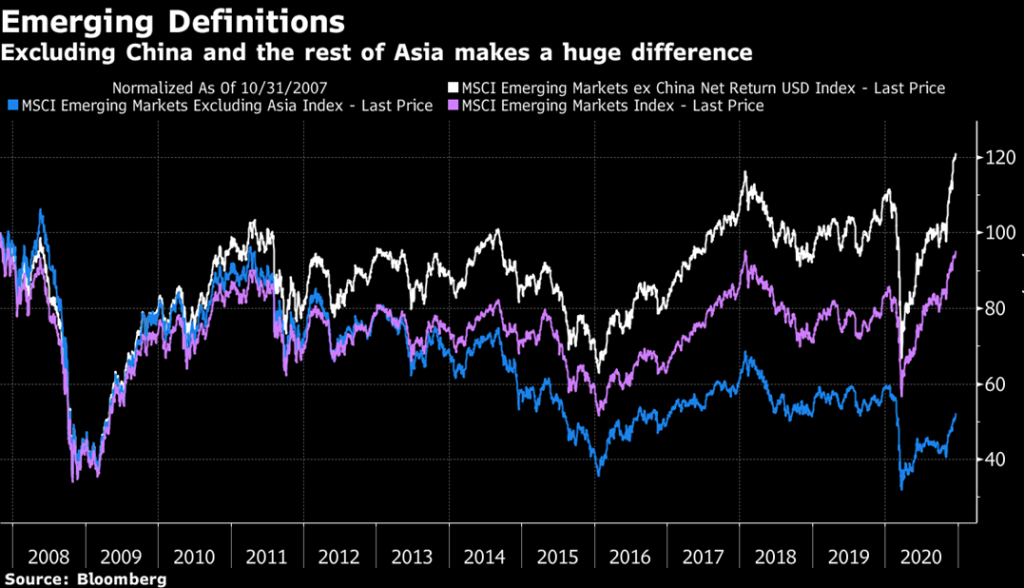 The chart above (source: Bloomberg) covers a twelve year period but you will see from the right hand side, emerging markets in general (purple) have recovered strongly, but not so well if you strip out Asia Pacific (blue). Adding back Asia but removing China gives the best result of all (white), suggesting that this region truly has been the engine of growth, but whilst the Chinese market has performed well, it is the peripheral Asian markets that have made the running. This tends to triangulate with the best performing stock markets so far for 2020 which have been Taiwan (+26%) and South Korea (+34%).

The other feature we talked about was the emergence, and ultimately the dominance of ‘new economy’ stocks, the so-called FAANGs (Facebook, Apple, Amazon, Netflix, Google). Unquestionably these companies have been major beneficiaries of the work from home/ stay at home mantra but this is a far cry from the dot-com days of the late 1990s, when technology companies seldom made any profits and the investment thesis was based on whether they could make one before they ran out of cash (the ‘burn’ rate). The FAANG companies are different. They are extremely well run companies, generating huge profits and whilst COVID has accelerated their earnings, our lives have likely changed to such an extent that these and the likes of Zoom and Ocado will continue to prosper.

But buyer-beware. Shareholders have shown themselves to be extremely willing to cough up very high multiples to buy some of these companies. None illustrate this point, nor indeed the topsy-turvy nature of the investment landscape in 2020, more than Tesla. Shares in the electric vehicle maker have risen over 600% so far this year. In November they were admitted to the S&P500 for the first time. On the day the announcement was made, the shares rose by 13%, valuing the company by an additional $50bn. This one-day move is bigger than the whole of Kimberly-Clark, and more than the entire worth of Moderna, maker of the COVID vaccine. To highlight the absurdity of this, the admissions committee for the S&P500 created more ‘shareholder value’ on that one day, than all the scientists at Moderna did in creating the vaccine!

So what should we make of all this in terms of understanding what might happen in 2021? As we have said frequently in these pages, markets are notoriously forward-looking and the recent strength in stocks has been on the premise that a vaccine will lead to a return to normality and this will kick-start the beleaguered economy. Whilst this is not an unreasonable assumption, too few people have been vaccinated so far and most Western economies are still labouring under some degree of restriction. We do expect economic performance to pick up next year but this was always likely to be a ‘stop-start’ recovery, simply because the economy is not a ‘sleeping beauty’ which springs back to life at the gentle kiss of governments or central bankers. The longer lockdowns remain in place, the more tricky and lengthy the rehabilitation.

Plotting the exact path of recovery is extremely difficult, amplified by events of this weekend, but we are confident enough to predict that 2021 will see a further economic pick-up and this should provide further impetus to stock markets, particularly those in the east. For this reason we remain committed to, and overweight, equities across all our profiles. We will write more on the outlook for 2021 when we issue the profile reports in January so all that remains is to wish all our readers a very Merry Christmas and a happy New Year.