Posted at 11:09h in Uncategorized by cdcwm

Over the period 1968-69 Hong Kong flu killed around 100,000 Americans. At the time the US population was around 200m, meaning for COVID19 to have an equivalence (population is now 330m), the death toll would need to be around 165,000 (currently circa 100,000). This is rather simplistic but the important issue is with the flu outbreak of the late 1960s, authorities did not close shops, churches or keep children at home. Moreover Woodstock went ahead, attracting more than 400,000 festival-goers, though few that were there remember it, or so the saying goes.

The contrast with how the authorities have approached COVID19 is stark, yet despite the untold damage the lockdown will have inflicted on the world economy, there are signs that stock markets are starting to perk up. In an earlier edition I did say that stock markets usually bottom-out 3-6 months before a recession and my thesis was that if the trough in activity were to be May or June, then it was conceivable we had already witnessed the worst of the stock market falls. I also said share prices would need to stabilise first and there is clear evidence this is starting to happen.

Since our last update on 13th May, the FTSE100 has barely changed (it is up 1%), but interestingly there has been very little deviation from the current level of 6060. Compare that to February and March when daily price movements of 5% were commonplace. Of course we cannot say for sure that prices won’t fall, after all there is some pretty horrific economic data still to come, but with infections past their peak and lockdowns being eased, there has been a more upbeat feel to financial markets.

So what about the recovery? Well, as is often the case, all eyes turn to the other side of the Atlantic. Shareholders there have been in ebullient mood, with the S&P500 up 6% since our last bulletin. What’s more surprising is the US market is now only 12% below its previous peak with many asking if this can be justified given the carnage wreaked in the economy.

We think the answer lies in the competitive foundations of the US economical model. What I mean by this is best illustrated by the following chart: 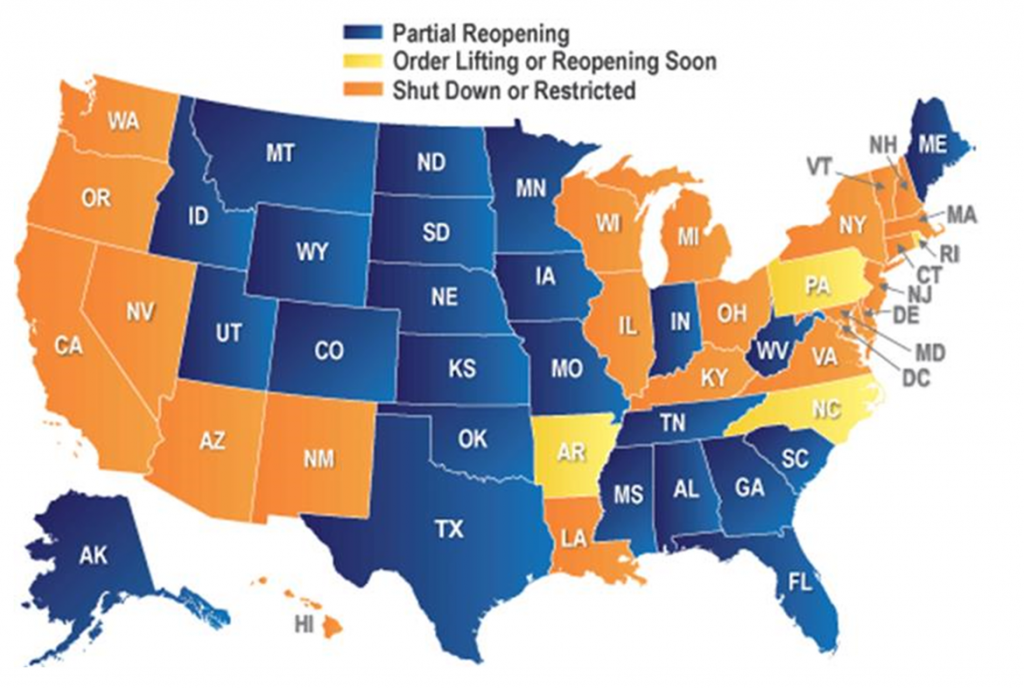 Despite this being a couple of weeks old, it shows that the majority of US states are now at least partially open, or are readying themselves to. Businesses in states that were slower to open like Kentucky (KY) will have been looking at its neighbours in Tennessee (TN) and crying foul because businesses there would enjoy a (albeit temporary) competitive advantage by being domiciled in a more liberal location. So pressure builds in adjacent states to lift restrictions. Elon Musk even threatened the Californian state legislators with relocating Tesla if they did not accede to getting their economy open.

This rapid reopening could pose problems for infection rates but it equally helps to explain the likely path of economic recovery. Closer to home, the easing of restrictions has been more pedestrian, with car showrooms and open air markets to open next week, followed by non-essential stores a fortnight later. As we have said before, this is likely to be the deepest recession in our lifetime, but that does not mean it will be the longest, far from it. Whilst regaining previous economic levels might take some time, high frequency data such as rail and air travel, hotel occupancy and fuel sales are all off their lows, suggesting some tentative green shoots.

Whether we see the much hoped-for V-shaped recovery is a matter of conjecture. We think there will be hallmarks of a V but the eventual pattern could be more of a Nike Swoosh or square root symbol. All of which takes us back to the question posed which was whether the more recent stock market performance optimism is justified.

The answer is a cautious ‘yes’. Economies reopening for business is undoubtedly good news. Company earnings have been, and in the short term will continue to be, hit. In response, many have cut or postponed dividends. During the darkest days, we did feel investors were being too pessimistic on the likely magnitude of cuts but in our view, companies paring back dividends to more affordable levels is actually a good thing. As at 31st March, the yield on the FTSE All Share (UK) index was 5.4%, so a 40% reduction in dividends still leaves the UK on a yield valuation of 3.2%, which is twice the rate of inflation.

The issue around dividends helps to explain why there has been a decoupling of UK and US share prices over the past few weeks: 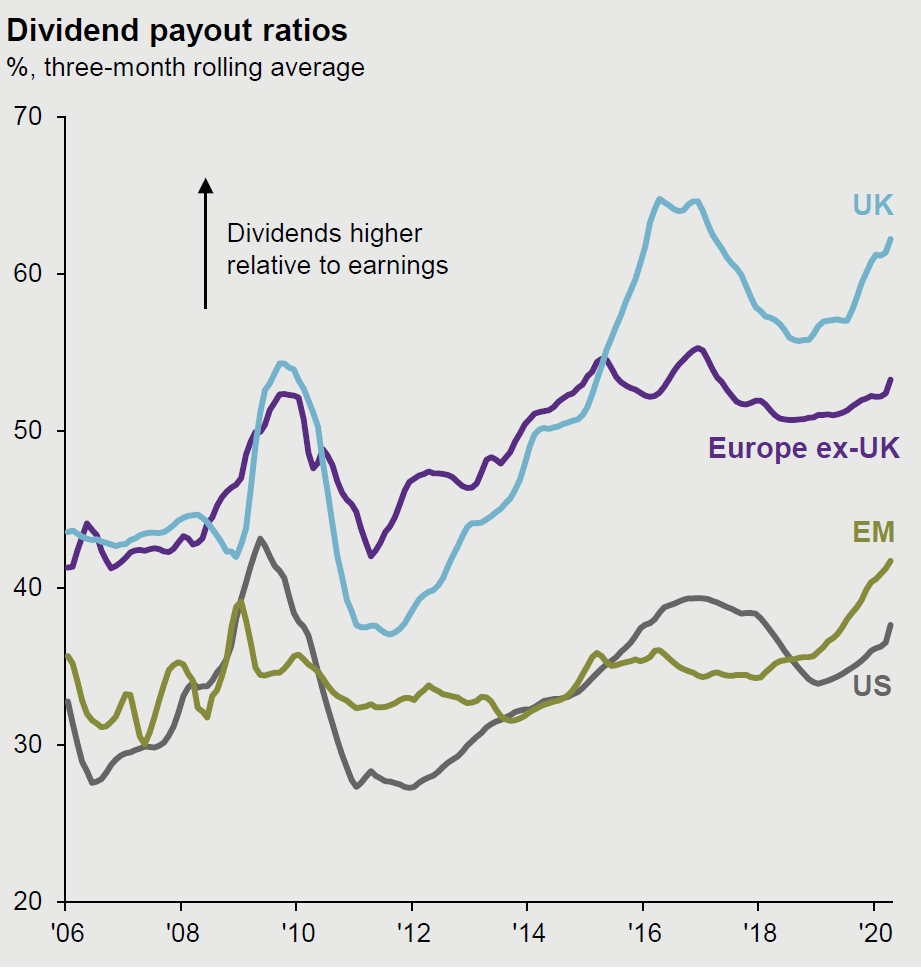 As you will see, UK companies (pale blue line) tend to pay out a higher proportion of earnings in the form of dividends than their US (grey) counterparts, which naturally makes the UK stock market more vulnerable to a cull of dividends. The other issue is the composition of our respective stock markets. Around 40% of the US market is accounted for by healthcare and IT (both of which have performed well) and only 15% is energy and financials (which haven’t). The UK is almost the alter-ego of this with 15% and 30% respectively which also helps explain the variance in recovery rate.

In the interests of staying grounded just one final point to ponder. It has been said that if you laid all the world economists end to end, they would still not reach a conclusion. The current malaise makes that even less likely but being fair to them, unpicking the complexities around how economic performance pans out from here, and how that translates into asset prices is virtually impossible. Unsurprisingly, there is still a wide dispersion of views at present but it is fair to say we just about stand in the more optimistic camp. The phrase ‘cautiously optimistic’ springs to mind.