Posted at 11:48h in Uncategorized by cdcwm

Note: Since this note was written, the International Monetary Fund (IMF) has openly criticised the tenor and content of last week’s budget. Whether this leads to any kind of moderation is unclear but in IMF terms, this was a blunt message. We will know more as the tax plans get costed over the coming weeks, but such as sharp rebuke, will undoubtedly be ringing in the Chancellor’s ears.

It has been a few weeks since our last update, but it is fair to say that since we issued the Profile Updates in July, markets had started to regain some composure, even clawing back around half of their losses since the start of the year. Last week put a decisive stop to that, with central banks reiterating their commitment to combatting inflation and Kwasi Kwarteng’s maiden budget on Friday provoking quite a stir in markets.

Given the reaction, this bulletin is longer than usual, but there quite a few issues to grapple with. Before we consider the economic implications and the market reaction, let’s just recap on some of the highlights:

The Chancellor made no effort to conceal the intention of the mini-budget, which was unashamedly aimed at reinvigorating growth and to maintain this at a trend rate of 2.5%. The UK’s productivity growth has been deteriorating for some time, along with its ability to attract foreign direct investment. To target this is admirable, and in normal times there would be plenty to admire in the budget, after all, many of the measures announced are designed to encourage businesses to invest and grow, which would normally be welcomed by investors.

Sadly these are not normal times. Whilst ‘giveaway’ budgets are often greeted with cheer by investors there were no champagne corks popping this time. The pound briefly fell to an all-time low against the dollar, even surpassing the damage meted out in the wake of the COVID lockdown, the Brexit referendum result and the UK’s exit from the Exchange Rate Mechanism (ERM). As the chart below illustrates, last week was particularly brutal for the UK currency, and this has continued this week. 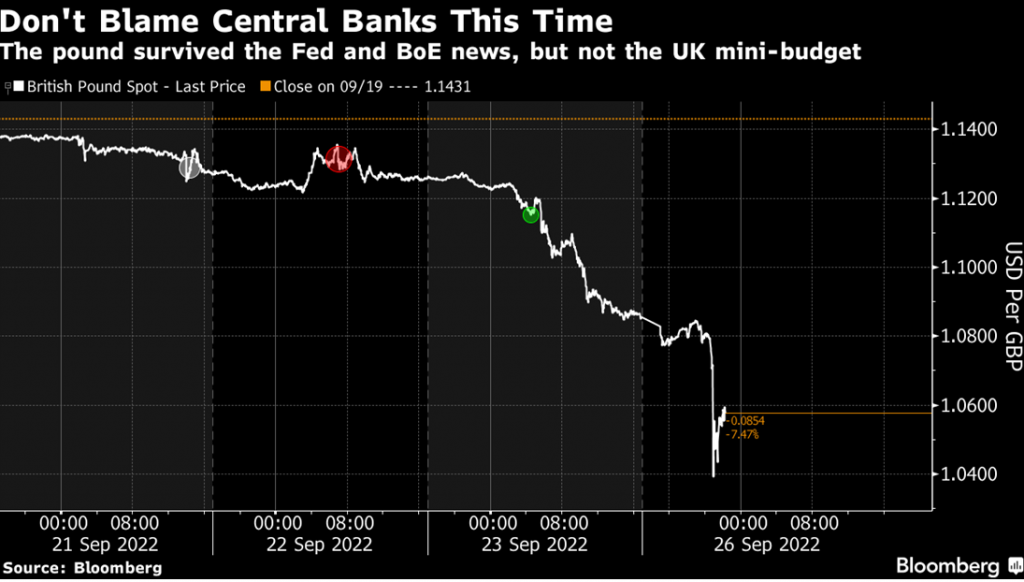 A weaker domestic currency tends to be inflationary (which we have plenty of already in the UK) as imports, raw materials and commodities cost more, especially when they are priced in dollars. On the other hand, exporters and companies that generate earnings overseas rather like it. UK products look cheaper, which benefits exporters and international earners get a boost to profits from currency translation. Immediately after the Brexit vote, the pound sank, but stock prices of multinational UK firms soared.

Some commentators attributed Sterling’s plight to the fact that the BoE only increased rates by 0.5% (the day before the budget), when the US opted for 0.75% the same week. This doesn’t quite stack up for us. The only major currency to fare worse than the pound was the Swedish Krona and there the Riksbank hiked rates by a full 1%. Sterling weakness seems more about a loss of faith in a coherent plan but it should also be seen in the context of a rampant dollar. Ignoring the dollar, comparing the pound to a basket of other currencies, yes it has been weaker, but within an acceptable range.

The primary concern for investors has been, and remains, inflation. And with very good reason. Inflation in the UK (August) was running at a fraction under 10% and could rise further in October when the new energy price cap kicks in. In response to this, the Bank of England (BoE) has been raising interest rates in an attempt to tamp this down.

So we have the unusual situation in the UK whereby monetary policy (interest rates set by the BoE) is tightening, but fiscal policy (taxes announced by the Chancellor) is loosening. In other words, the Chancellor just made the BoE’s job of trying to get a hold of inflation a whole lot harder. To get a sense on just how much harder, Friday’s tax cuts represent the most significant since Anthony Barber was Chancellor in 1972. To be fair, Nigel Lawson in 1988 proved pretty profligate when he simplified and reduced higher rates of tax, but both periods were followed by rampant inflation, higher interest rates and ultimately recession. 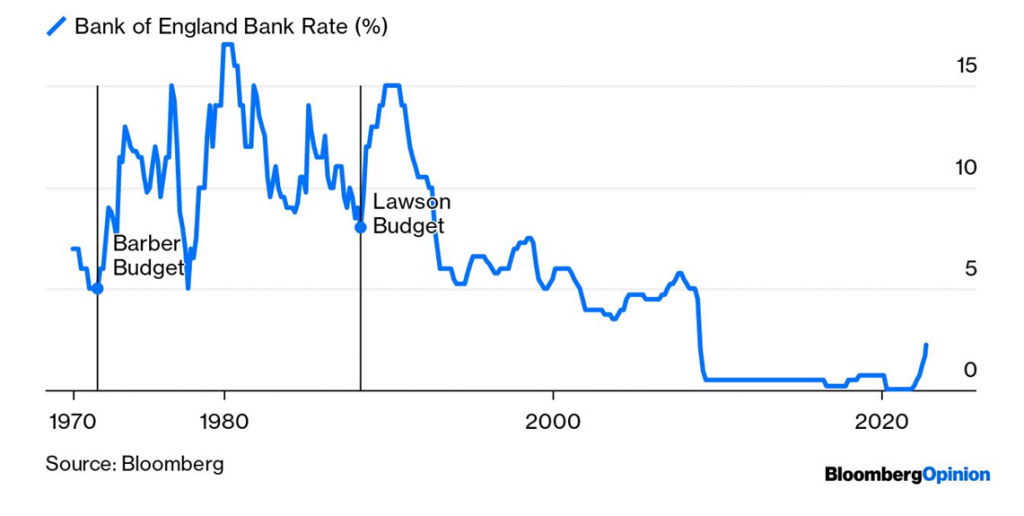 Markets have taken the view that this budget is not so much expansionary, as reckless. Mr Kwarteng’s announcement provided a barrage of measures aimed at expansion but very little on how this would be paid for. The Government Spending Monitor will be going through the books over the coming weeks to look for savings but there are questions legitimately being asked about why such a giveaway budget wasn’t properly costed in advance. The fear is that if savings cannot be found, tax cuts will have to be funded by more borrowing, and that means issuing more gilts.

So the UK currency was not the only casualty. Bond (gilts) markets reacted with apoplexy. Because the UK has an inflation issue and interest rates have been rising, bond yields had been increasing anyway (with prices falling). A loose budget, which has the potential to fuel, rather than combat inflation, has served to douse the inflationary flames with petrol. Add in the possibility of more supply hitting the bond market and it is easy to see why bond prices have retreated. 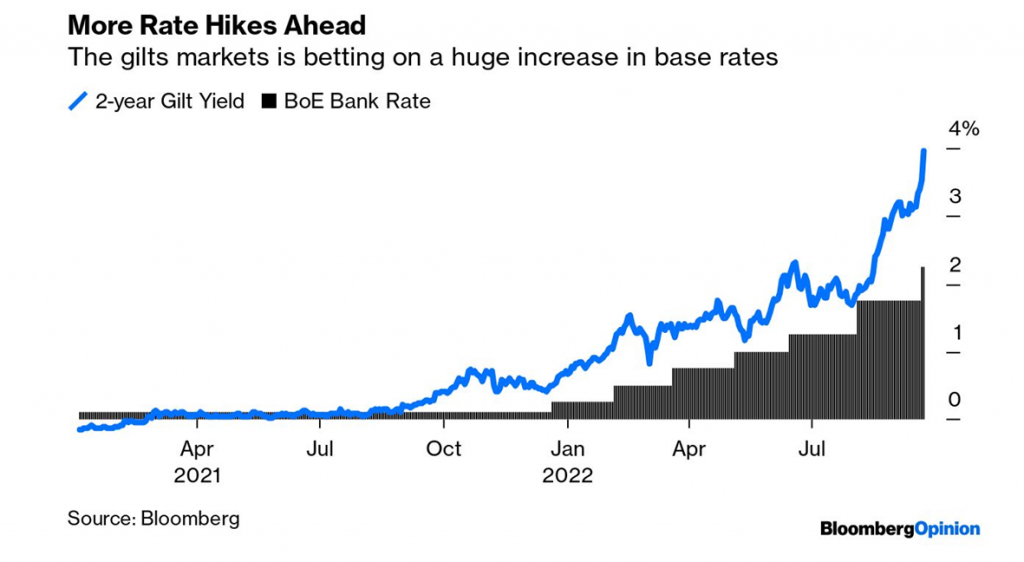 The chart above shows the extent of the malaise. At the start of 2021, the 2 year Gilt yield was actually negative, now it is 4.2%, a remarkable turnaround for bond holders. A combination of weak currency and surging bond yields is more redolent of a developing economy than a major Western one, and it represents a marked lack of confidence in the new Conservative leadership.

Given past experiences of ill-timed tax give-aways, and the tenor of Friday’s announcement which contravenes just about every economic handbook, why on earth entertain such a move? The answer is almost certainly political. The opposition accused Liz Truss and her Chancellor as being two deadbeat gamblers making one last sizeable bet to try and stay solvent. This is probably a fair analogy because with an election looming in 2024, time is running out. As things stand, it is entirely feasible the Conservatives could lose a 2024 election. Keeping the status quo is unlikely to improve their chances, so their best (or least bad) option is to go all-out and try to stoke the economy now, hoping it delivers enough growth by 2024. If the gambit fails, it’s academic, the Conservatives were going to lose anyway.

So far, there’s not been that much to be positive about. It’s a hackneyed phrase, but ‘it is always darkest before dawn’, so with that uppermost, we want to sign off on a high. Many readers will have seen the chart below, or at least a variation of it, which highlights the cycle of emotions investors typically go through when markets are depressed or buoyant, and everything else in between. 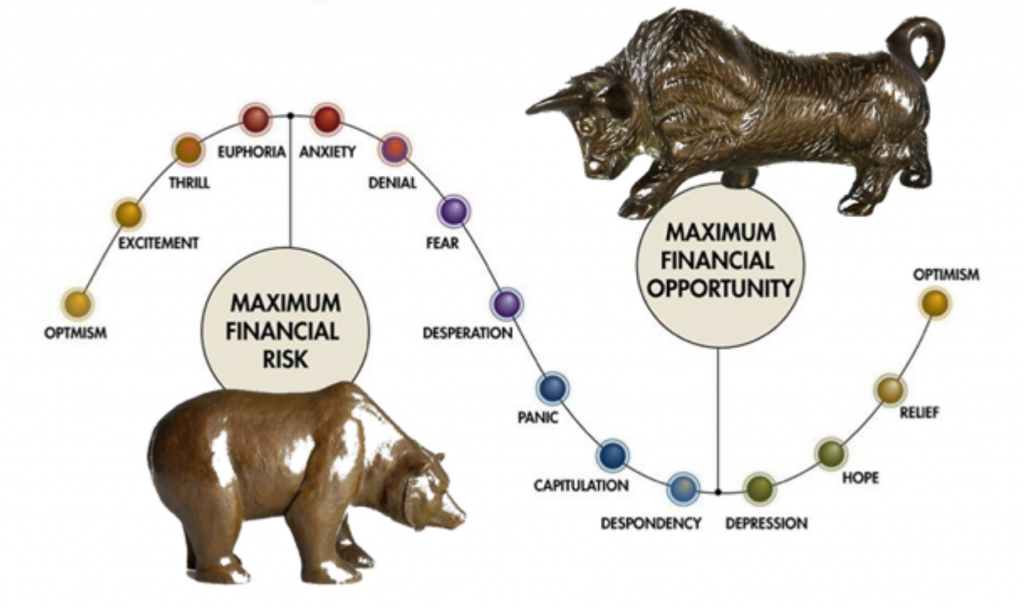 We use it to illustrate that the point of maximum financial risk is very often when markets are in ebullient mood. At times like this, investors tend to think things will be good forever and they tend to add to their portfolios. The alter-ego of this is the point of maximum financial opportunity, which is when markets are usually downbeat. At that point investors have a propensity to throw in the towel and sign off by saying ‘perhaps markets just aren’t for me’.

Whilst this type of behaviour sounds counter-intuitive, it is. And it is not just novice investors that fall prey to it. We believe we are currently somewhere around the ‘capitulation’ or ‘despondency’ stage yet the fund management industry holds the highest level of cash since 9/11. History suggests they are nearly always too late putting it to work, usually when the cycle is working its way back to ‘optimism’. Financial journalists, who should know better, are not immune either, plagued by what is known as the ‘cover curse’. Put simply, this is a phenomena whereby once a trend is so engrained it makes the front cover, it has already started to fizzle out. Classic examples include Businessweek magazine in 1981 which proclaimed ‘the death of equities’ only a few weeks before the longest bull market in history. Or more recently (2019), Bloomberg carrying the title ‘Inflation is Dead’. As we know now, it isn’t!

There can be no denying the world has an inflation problem and interest rates are on the up. Central banks which were way too slow to respond initially, are now on the case, and they have reaffirmed their commitment to bringing inflation back under control. Mr Kwarteng’s first budget merely underscores to us that interest rates will now probably need to be higher, for longer.

So what is CDC doing? The glib response is probably to talk more about what we are not doing, which is panicking. As seasoned investors, we have seen crises before, and emerged the other side. And this time will be no different. Regular readers will know that we have voiced concerns about bond markets for some time and as a consequence we have been underweight. Our view was that extensive use of quantitative easing (QE) during the global financial crisis and again during COVID, whilst necessary to keep the financial machine well-oiled, in effect put a huge tailwind behind bonds, which one day had to come to an end.

Instead we introduced assets like infrastructure and added to our weightings of ‘alternatives’ to improve diversification and provide more ballast to portfolios. The question we are asking ourselves now is whether the investment world has become unduly fixated with a sense of foreboding and guilty of extrapolating what we see currently, indefinitely into the future. If so, it will not be the first time.

We are not saying sentiment will rebound overnight, but returning to the issue lying at the heart of what we are seeing, we do believe we might be close to witnessing peak inflation, which will then start to moderate. Getting it from say 10% to 8% is relatively easy. Bringing it back to the 2% target will prove a stiffer challenge. But in financial markets it is often better to travel than arrive, meaning tangible evidence that a corner has been turned will likely be enough to see a more optimistic tone emerge. As we saw in 2020, when sentiment turns, which it eventually will, the recovery for financial markets can be rapid.