Why the descent is often more tricky than the ascent

Posted at 10:50h in Uncategorized by cdcwm

It has been a few weeks since our last update and during that time financial markets have continued to gyrate. In the US, the S&P500 is down around 200 points, but in the UK, the FTSE100 is actually up by a corresponding amount.

Two years ago markets were rattled by the fall-out from COVID and rightly so. The effective shut-down of the world economy and the untold damage to global supply chains is still having an impact on our day to day lives, as anyone ordering building materials, technology components or even soft furnishings will attest to. The market reaction to the pandemic was to some degree justified in our opinion because corporate earnings became harder to come by and dividends, the fuel in the engine of markets, ran dry.

Many investors and commentators were surprised by the speed of the recovery in stock prices as the economy reopened, but we weren’t. The market’s powers of recovery from set-backs, is quite astonishing. But just as the recovery looked to be gaining momentum, Mr Putin decided to roll his troops across the border into Ukraine and this prompted another dive for cover (pun unintentional). Despite the initial panic, which is not uncommon, both the major UK and US stock indices are broadly where they were at the time of the invasion.

Whilst investors quickly came to the realisation that the conflict would not completely unhinge world activity, it did throw petrol onto inflationary flames which had already started to take hold. So COVID gave way to conflict in investors’ minds and this in turn has now made way for an altogether thornier problem. Monetary policy.

Traditionally the way central banks combat inflation, not that it has been much of an issue this century, has been to put up interest rates. Bond yields follow rates, so when interest rates are falling so too do bond yields, and the consequence of this is bond prices rise. The chart below shows what has happened in graphic detail over the past 30 years: 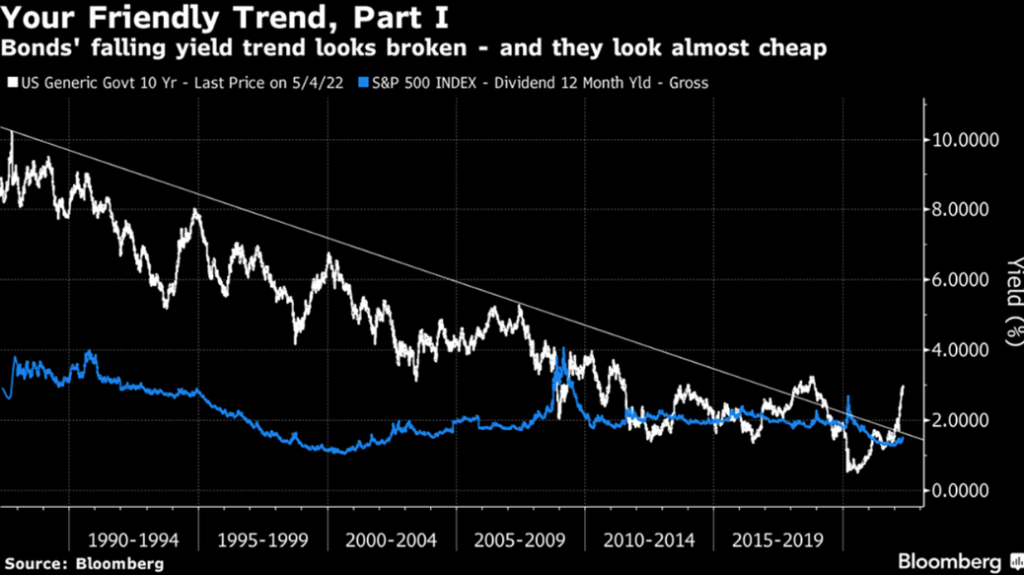 You will see from the white line that since the 1990s, because of an almost complete absence of inflationary pressure, interest rates have been able to stay low (and stable), leading to a long term decline in bond yields. But notice the far right of the chart. Because of COVID, Ukraine (energy prices), and extremely loose monetary policy, inflation has become problematical for the first time since the 1990s. Interest rates are on the rise to combat this and the white line (bond yields) has broken out of its downtrend.

So why does this cause so much of an issue for investors?

The answer is two-fold. First and most simply is rising bond yields are inversely proportional to bond prices, in other words, since inflation started to stir, bond prices have fallen. We have long argued this would be the case and it explains why we have been underweight bonds for some time. To put some numbers on this, a year ago a 10 year Government Bond in the UK would have offered a yield of 0.8%. It is now 1.8% and as long as inflation remains a problem (or gets worse), the yield could well rise further. When we feel the yield has backed up to a level where investors are adequately compensated for any risks, we will build back our bond weighting, but we are not there yet.

The second less widely appreciated consequence of bond yields is the impact they have on equity valuations. Generally the lower the yield on bonds, the higher the stock market can be without looking unduly expensive. The recent rise in yields, which remember are as a consequence of inflation fears, means equity valuations get adjusted down. Because valuations were more stretched in the US, and their bond yields have risen by more, this helps to explain why the UK market has held up slightly better so far this year.

This is not the whole story. We are seeing a certain asymmetry in the response to company profit announcements. Companies that have met or exceeded earnings forecasts might get a modest price boost, but those that miss, such as Meta (Facebook) and Netflix did recently have been punished disproportionately. Indeed it is the technology stocks that served investors so well during the pandemic that have experienced the greatest thrashing. The chart below shows the relative performance of the most well known technology stocks (often referred to as FANGS) divided by the wider market. Notice the strong outperformance during 2020 giving way to the sharp reversal so far this year. 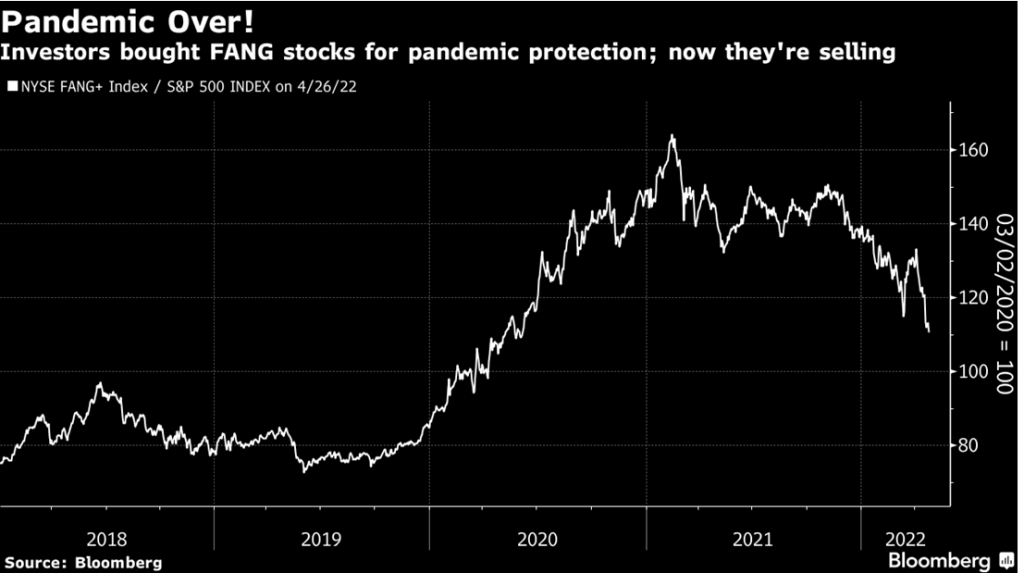 There is one added complication to all of this and that is the end of Quantitative Easing, or QE. During the global financial crisis and again under COVID, central banks printed money like it was going out of fashion. They use this to buy up bonds which injects liquidity into the financial system. It is an important tool in keeping the financial machinery lubricated in times of stress but it has one potentially undesirable consequence. It swells the supply of money and that is inflationary. Now inflation has taken hold, central banks not only have to raise interest rates but they have to think about taking liquidity back out of the system. This is called Quantitative Tightening (QT) and involves the central bank allowing bonds it has bought under QE to mature or be sold. Proceeds are then used to reduce their balance sheet and shrink the supply of money.

In the same way that mountaineers often claim the ascent is easier than the descent, QE tends to be easier than QT. This is especially so now because the Federal Reserve appears to have been very slow to wake up to the inflationary threat meaning it has to tighten policy (aggressively) whilst trying to avoid pile-driving the economy into recession.

Given this, it is easy to see why markets are volatile. It is worried that inflation is becoming a problem, which it is, and the policy response might be to trigger a recession, or even worse, no growth plus inflation, known as stagflation. This is compounded by the fact that nobody can truly know where inflation will end up. Nor can they know how far behind the curve the Fed truly is or how quickly policy tightening will start to have the desired effect in bringing inflation under control.

Given this uncertainty, the best advice is to make limited changes to our investment strategies, but we have been, and will continue to, rebalance portfolios to take advantage of these extremes in pricing across asset classes. We remain underweight bonds, and will only return when we believe the current repricing has run its course. Within all portfolios we have been carrying either a higher weighting in alternatives or cash since the start of the year and we are happy to retain these positions until the outlook becomes clearer.

Markets face a tricky descent from ultra-loose monetary policy, but a sensibly diversified portfolio will always provide something of a safety-net.